Heineman says Saad will be back for 2014 and that he has no idea what the forward's recent tweet was about.

Sporting Club CEO Robb Heineman has commented on the Soony Saad transfer rumors, this after the Sporting Kansas City forward gave the impression he was leaving Kansas City in a since been deleted tweet. 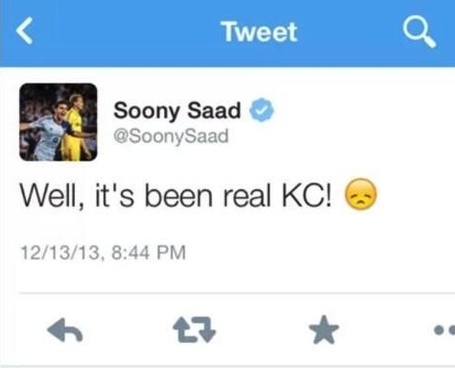 Heineman says he has "no idea" what Saad is referring to in his tweet, adding the following:

Just got on twitter. Have no idea what soonys tweet is..personal favorite...Will be great for us in 2014 unless I'm missing something.

Many suspect that Saad is either simply heading back home to Lebanon for the holidays or going on a post-season vacation.

With Dwyer and Collin rumors still floating about, Sporting Kansas City fans can rest easy knowing that one of the rumors have been squashed.