Keeping it Local - Could an All Kansas City or All Missouri team be competitive?

In light of Iceland's recent nearly triumphant ascent to playing in the World Cup, I was curious to see how good a team composed of only local players would perform. The results are... let's just say interesting.

Share All sharing options for: Keeping it Local - Could an All Kansas City or All Missouri team be competitive?

There were a couple of times I'd thought about this, to be honest, from a couple of angles, and for a couple of different reasons, but perhaps the big one was this. Iceland, a nation of slightly over 300,000 people, just missed the cut for the 2014 World Cup in Brazil, falling to croatia 2-0 in the play in game after finishing second in their Group. For an International Event that pits country against country I think the relative size of each nation is often overlooked, and Iceland here was a stellar example of a country smaller than many US cities that nearly made it to the biggest stage in world soccer.

They did it without Aron Jóhannsson as well, which brings up the second point. Who actually knew of Jóhannsson until he popped up on Klinsmann's radar? And how many of these players are out there? But even beyond that, how many of those players are right under our noses? Which ties into the next name, and my next sort of inspiration for this experiment : Vedad Ibiševic.

Ibiševic, who came to St. Louis as a Bosnian immigrant, and held a green card, is on record as saying he would have played for the USMNT had he been approached. Ignoring all the questions of whether or not he would have put a stellar European career on hold while gaining citizenship, I think he could be seen as "one who got away", in the same line as Giuseppe Rossi.

With the signing of Andy Gruenebaum, the local connection, players playing for Sporting who are from the area, has been bantered about somewhat, amongst fans and the local, and even national media, which got me thinking, just how local can we get and be good? Can we be MLS good? Can we be Iceland good? Better?! Let's find out!

First, the keeper pool. There's a couple keepers here (pun intended). Andy Gruenebaum is the most obvious, and has shown himself to be a quality MLS caliber net minder. Jon Kempin is also a local product and has featured significantly for the USMNT at the youth level. We're going to round out the list with Scott Angevine, former MLS pool keeper and current goalie for the Des Moines Menace.

The back line doesn't look totally awful either. Matt Besler and Seth Sinovic were both stellar defenders in MLS this year, and Besler may already have one foot in Brazil with the USMNT. It wouldn't be too surprising if Sinovic got a call to Camp Cupcake as well. 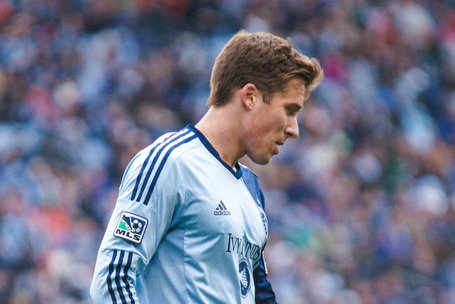 To field four back there, I've added homegrown products Kevin Ellis and Erik Palmer-Brown, both more or less entirely untested as professionals, but both with enough potential to warrant inclusion here, despite their young age. If we're desperate for depth, we can also add Coady Andrews, a defender from Shawnee who has played for the Kansas City Brass and Des Moines Menace, and now plays for the Harrisburg City Islanders in USL Pro.

This is where things get a little tough. The midfield is a bit of a grab bag. Most obvious will be the inclusion of Jack Jewsury (from Joplin/Springfield, but we'll claim him for Kansas City), who was a staple for the old Wizards and is really enjoying a renaissance with the Portland Timbers. Next we're going to add Christian Duke, who spent much of the 2013 season on loan to Orlando City. A third midfield spot goes to Michael Thomas, who spent some time in the Swedish top flight before coming back to Kansas City, being traded to Toronto FC, and now unattached as far as I'm aware, after Toronto did not re-sign him. Fourth we look at Kyle Miller, who was recently waived by Sporting and whose only real claim to fame was this bizarre goal against Stoke.

And now, because attacking options are actually quite thin, we're going to add a fifth option, Alex Sweetin, a senior at St. Louis University originally form Overland Park and one of 50 seniors invited to the MLS combine.

Which leaves us one spot to fill. Forward. And there's only one option I see. Will John, currently playing for AZAL in the Azerbaijan Premier League (and with 7 goals from 22 games, I might add).

So, from a metro area a bit bigger than Iceland, we've found a team that... well, frankly, doesn't look all that great. Back line and keeper may be solid enough, but I imagine Croatia would thump Kansas City a bit more than 2-0. Of course, I imagine Kansas City could put together a much better baseball or American football team than Iceland could ever dream of... Here's how the lineup would look. 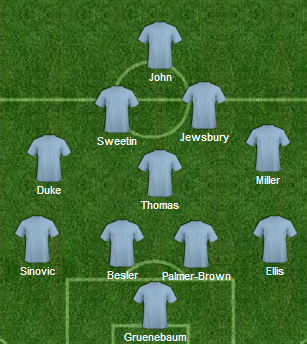 While we're on the subject though, what happens if we expand our search to St. Louis and make it an all Missouri + Johnson County team? This actually looks significantly better.

There's some notable players from St. Louis. Matt Pickens could probably challenge Gruenbaum for a spot. The back line gets better with the addition of Tim Ream, playing for Bolton in the EPL. We can also add some heft by including Brandon Barklage, who played in 26 matches, including 2 playoff games, for the New York Red Bulls in 2013 and was recently dished to San Jose. Or, if you prefer, add Real Salt Lake's Chris Schuler.

The midfield gets a big boost by the inclusion of Brad Davis, who hails from St. Charles and who has been a staple for Houston. We're also fortunate that we're able to switch to a 4-4-2, provided you grant me one luxury. Vedad Ibiševic.

Now like I mentioned, Ibiševic was an immigrant to the area and still at least a year away from citizenship, despite holding a green card, but if we're going to say attending highs chool in St. Louis counts, then I want him on our team. We also can add Houston's Will Bruin to our forward lineup.

If we do want to exclude Ibiševic I might offer up Brandon Manzonelli as a Will John replacement. A St. Louis product who spent time in Villareal's youth system with trials with Manchester City and Blackburn Rover's before bouncing around unsuccessfully in Europe and landing with the Atlanta Silver backs of the NASL. I actually think he's an interesting product, but at age 23, he perhaps spent too much time spinning his wheels in Europe to really become a fully capable player.

Here's what an all Missouri + Johnson County, KS team lines up like. 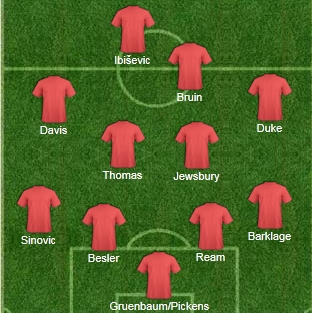 With the possible exception of Miller and Thomas in the midfield, I actually think that looks like a solid XI. Potentially challenging against Croatia or Iceland? The problem, of course, as always, is depth. To simply fill out the bench, here's a few more names for consideration, I think all from St. Louis. Now that I think about it, maybe Grossman replaces Miller?

So, you can get to about 18, relatively decent players from Missouri + Johnson County, KS. I think you're still a far cry from fielding a truly competitive team, mind you, but there's a glimmer of quality there, and with a lucky draw, and some luck on the field, I think there's maybe a Mighty Ducks moment or two in this group of guys...

Now tell me who I've overlooked or forgotten please, or just plain gotten wrong. A lot of this is just new digging for me so I'm sure there's errors a plenty. But as a thought experiment, I think it's kind of neat.

Actually, one last thing, I stumbled across this article today and found it kind of interesting. I won't talk much about it, as I think the title speaks for itself.

Our Biggest Mistake: Talent selection instead of talent identification