I Was Told There Would Be No Math

Breaking down the 2013 season stats for SKC and trying to find indicators for a winning performance.

Share All sharing options for: I Was Told There Would Be No Math

More than I maybe should.

Enough to be dangerous, as they say.

At work, I tend to be a bit of a spreadsheet jockey. I've got a whole folder setup just called "Spreadsheets" that I add to, if not daily, at least weekly.

One thing I like doing is tracking stats for MLS matches and looking over to try to see if there's anything interesting under the surface. It used to be a little harder, but now that Opta has come aboard with MLS, and plenty of their stat info is available via the MLS fantasy game, you can really find a lot of interesting stuff. I'm going to say interesting and not useful because, contrary to everything I'm saying, I'm not sure stats alone are ever really a good indicator of anything.

A warning : Something I've noticed in American sports is the trend to statify or quantify all things related to sports, and I think that's a dual edged sword... go too far into the realm of numbers and I think you can easily lose sight of what's really happening in a match. All that said, some things do jump out when you step back and take a large veiw of the data pool, and a few things I didn't expect.

Clearences, blocks, and interecptions - Unfortunatly, I was only able to find the combined stat for this

Errors laeading to a goal

Wow. That looks like even more now that I've typed it out instead of just kept it in a spreadsheet. It's not as daunting as it looks though, I promise. Here's a table of simple stats for SKCs 2013 campaign. 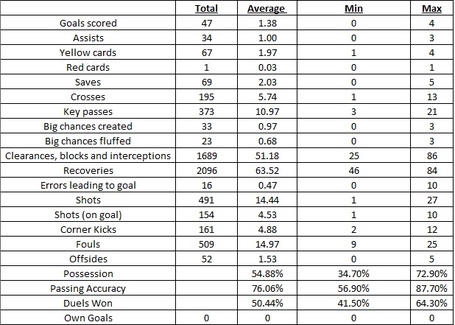 Perhaps the more, or even most interesting bit is the nearly 55% possession stat, along with the fact that SKC finished completing about 76% of their passes (this is actually a bit skewed without the full passing numbers, but good enough for Government work), and won just over half of their duels (Again, slightly skewed) over the course of the season. Where it gets interesting, though, at least I think, is seeing how these stats stack up on a game by game basis. The quickest way to look at this is to compare, on a game by game basis, how many times SKC's stat figure was higher than their opponents. This is easy enough to do in Excel, and the final product looks like this. 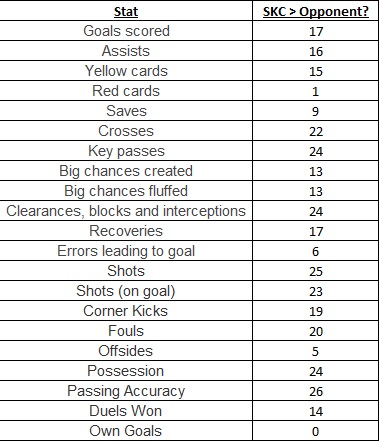 Can any of those stats actually help us see what's important and what's not when it comes to winning a match? Or, at least, what correlates with a positive result? The easiest way to do this is just to sort these stats by matches won. 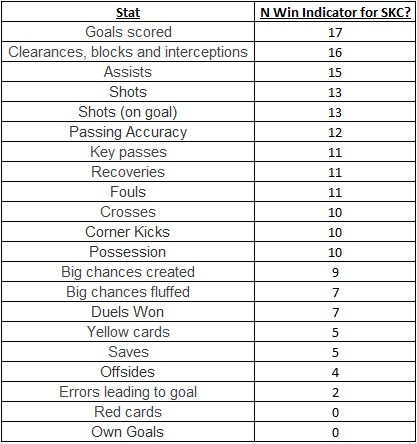 Now, perhaps the most interesting stat here is the Clearances, Blocks, and Interceptions, or CBI stat and how well it correlates with an SKC win. Of their 17 wins, only once did the oponnent have more CBIs. Perhaps one probably explanation is that, when SKC has a lead, we adopt a boot-it-away mentality (which I think is a good thing) and play more defensively. Another possibility is that SKC is just really good at clogging passing and shooting lanes, creating more interceptions and blocks. I'd definitely believe the former, I think we're a very good team at picking off passes. We never struck me as much of a"bodies flying around blocking shots" type of dense...

The other interesting thing is that, while SKC is notorious for wild shots and their poor finishing, shots and shots on goal were both also fairly strong predictors of wins. So perhaps, when it comes to shots, it truly is quantity over quality? Of course we'd love to have both. The stuff in the middle is sort of interesting, with one big exception, at least in my mind. SKC lead in possession in only 10 of 17 wins, implying that simple possession isn't enough to really close out a game. Even more surprising, to me at least, was that only 7 times did SKC win the duel battle in their 17 wins. To me, this suggest that a teams defensive form is a more important factor than 1-on-1 defending, and ties back into the above notion that SKC is very good at team defense and clogging lanes, staying compact in a defensive shell.

Saves being low there is interesting, but makes sense. Jimmy rarely needed to come up big for an SKC win, most of the dirty work was done by the defense. Also interesting at the bottom is the fact that, when couging up an error that lead to a goal (something SKC did 7 times), they won only twice. So big errors tended to put SKC into a whole they could only climb out of less than one time in three. Avoiding errors in MLS is a big thing. Conversely, let's look at what SKC opponents table looks like. 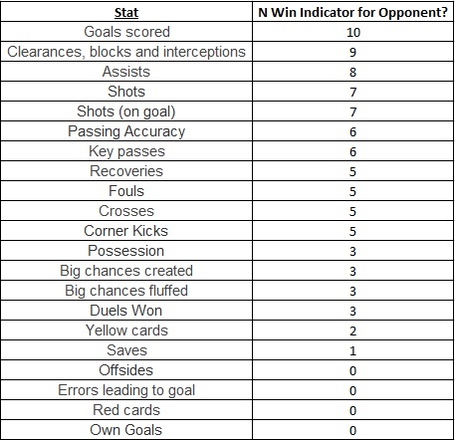 Well hey now, look at that. The order is identical. I think that, right there, is a key takeaway from this quick look. The way SKC won matches, from a statistical look, is largely the same as the way they lost it. CBIs is the best stat predictor/indicator for a win, better than even assists. Possession and duels won, on the other hand, is not. And teams that made errors which lead to goals had a very hard time coming back.

So what does this all mean? Well, off the top of my head, I'd say there's maybe something to be said for the "Pray and Spray" type of shooting SKC has become known for. Think of it this way. Sporting finished the season with just over 9% of their shots turned into goals. The best team in the league, New York, finished at around 14.5%, or about 160% of what SKC did. Now there'd be two ways for SKC to catch up to the "best" in terms of goals from shots. Either improve their shooting by 60% so they're also turning in 14.5% of their shots into goals, or shoot 60% more shots, without improving their quality... Another thought is that errors leading to goals can be devastating. As I said before, SKC was only able to overcome these errors twice out of 7 times. No team that errored SKC a goal came back to win.

One more thought is that, both SKC and their MLS opponents had very poor "Big chance created" to "Big chance converted/succeeded" ratios... either the Opta guy charting these games has a harsh definition of what a "Big chance" opportunity is, or MLS players struggle with big opportunities... make of that what you will.

Maybe it won't come as a big surprise that things like possession, crosses, corner kicks, or 1-on-1 duels aren't a big predictor/indicator or a victorious team, but often times after games we get to hear the cliché "Dominated the stat sheet everywhere except where it counts", but maybe it's time to move past that and see that things like holding on to the ball don't necessarily translate to success if you're not getting it done elsewhere...

I've only recently compiled the full season data set and haven't really begun to parse it yet. Be warned. Stay tuned.