Does "parity" actually exist in MLS? And while we're on the subject, how does MLS parity compare to parity in other top flight leagues around?

Lately I've seen a bit of discussion on whether or not this has been a crazy year in the English Premier League and it got me thinking back to the subject of "parity" in MLS, something that pundits go back and forth on when discussing "Super Clubs" and salary caps and overall league appeal. It's sort of an interesting topic, I think, at least from a business stand point. I'd wager that there was some groaning and eye-rolling in the MLS marketing department when the TV ratings for the MLS Cup came in, surely at least somewhat a result of two "small market" teams without any big name, marquee players to represent the league, but two teams without huge players who have both relatively recently turned around struggling franchises into championship teams is exactly the kind of result one can expect from a league with a large amount of parity.

Is parity/team equality something that can actually be measured and quantified? I'm going to say that, yes, yes it can, and it's actually somewhat easy to do.

The easiest way to think about it is to imagine the two extremes. On one hand, in a league with no parity, each club finishes in the same position year after year. That is to say, the team that won the league last year will win the league this year, the team in second place will be in second, the team in third in third again, etc. etc. Not very fun, is it? But you can sort of imagine this type of tiering happening in an uncapped and unchecked league with runaway spending where teams get "locked in" each year.

The flip side would then be a league where there's no way to predict what's going to happen each year. The champion could be in the basement, the worst team ever could suddenly win it all, and every year is a clean slate which has no bearing on how a team performed in the prior year. This would be a league with true "parity", where something like players are assigned to teams at random with equal salaries and limitations and such. This is much more how MLS is setup, with an "even playing field" so everyone has at least some chance every year.

To see where leagues line up, the easiest thing to do is to just plot the standings/table positions for each team from one year and see how they correlate to their position in the following year. By doing this for each team for several seasons, you can start to get a feel for how good of a predicator a team's final standing one year is in predicting where it will finish the following year. For the 0 parity league, a graph of this would look like a line at a 45 degree angle plotting the equation X = Y. For a league with total parity, this would be a simple horizontal line, indicating no relationship between year over year results.

I went ahead and looked at these plots for MLS, the English Premier League, the Bundesliga, La Liga, and then the Russian Premier League (somewhat comparable to MLS), the Australian A League (also comparable to MLS, or at least where MLS used to be) and Liga MX (a good look at the other big league in our region) over the last 5 seasons. The results are... well, let's just look at them.

First off, here's parity in MLS. 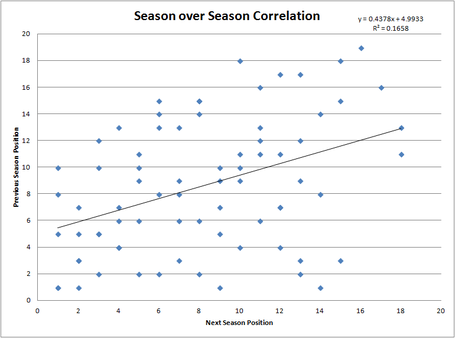 An R^2 value of 0 would indicate full parity, an R^2 of 1 would be no parity. At an R^2 of 0.17, you can say that there's very little correlation between how a team finishes in one year, and how it finishes in the next, which is to say, yes, there is a lot of variability in MLS. But one set of points maybe isn't good to gauge parity. What we really need is a look at some other top leagues around the world for some contrast. So let's look at the Premiership, shall we? 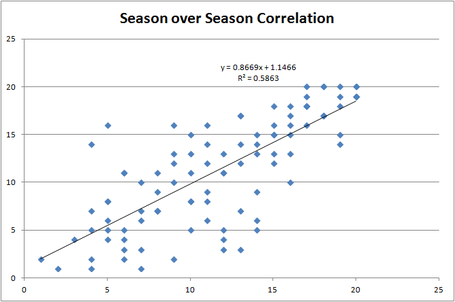 My that's an interesting comparison. The plot of position (previous year) vs position (following year) for the English Premier league is much, much tighter. That is to say, there's very little positional movement year in and year out. Teams newly promoted tend to struggle to avoid relegation. The "Big 4/5" tend to stay up top. Even mid table teams don't move around much. The R^2 of 0.59 is much much higher for the Premier League than for MLS and shows right there that much more parity exists for MLS. But how does our league compare to some other leagues around the world?

To the Bundesliga. Certainly with perennial powerhouse Bayern nearly always winning the league there's not much to be said about parity in Germany, right? Wrong. I was a little surprised myself to see it, but there's actually even more parity in the German league than there is in MLS. Here's their chart. 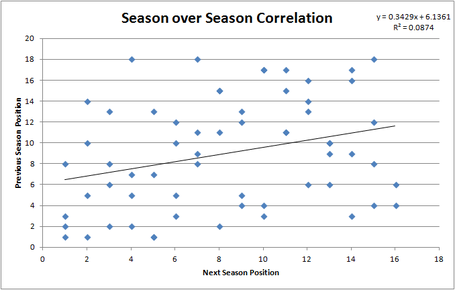 With an R^2 of just 0.09, there's even more movement year over year in Germany than there is in MLS.

How about La Liga? 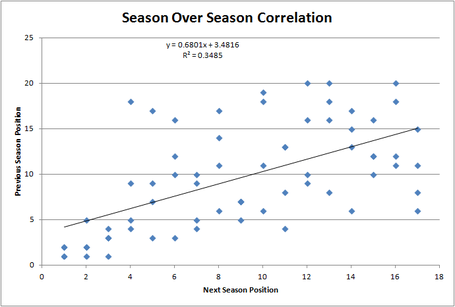 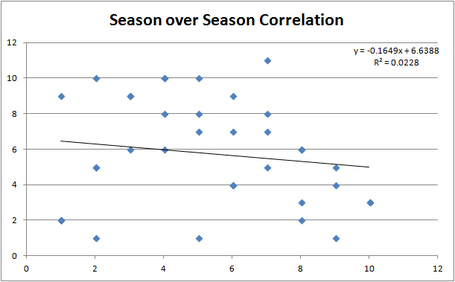 Wow. That's interesting. I'm not sure how to slice it, exactly, other than the A League is still somewhat in its infancy with teams coming and going and renaming and so on and so forth, and with their small draw and small talent pool I think maybe even small variations on teams can make big impacts.

Russia was perhaps a bit surprising. 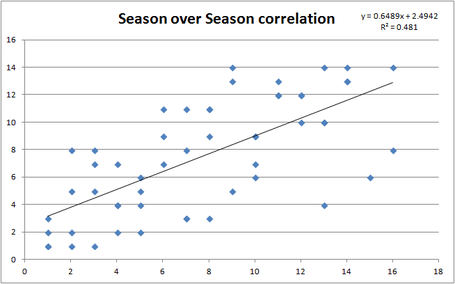 Looks a lot like England. I would venture the Russian league sees a bit of a divide between the "Haves" and "Have Nots" when it comes to big cities vs smaller ones.

Lastly, I checked out Liga MX. I was a bit surprised at how it worked out, but maybe I shouldn't be. 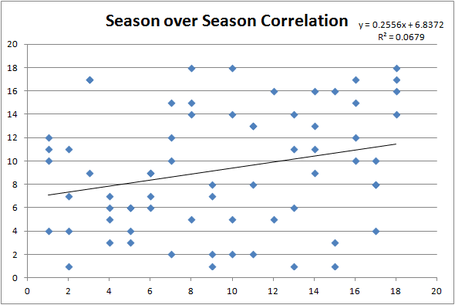 Now, perhaps Liga MX is an outlier because of the way it's season is structured (two half seasons). I actually didn't want to spend any time getting into why these trends may be so, and what leagues can do to help promote (or hinder) parity. Maybe a topic for another time?

At any rate, there you have it. Sort of. When looking at 7 leagues around the world (and I didn't cherry pick these to work out this way, I promise), parity in MLS comes in right at the half way mark. The German and Mexican league have more parity than MLS, as does the Australian league (though I hesitate to read too much into what our Australian friends are doing with their league), while La Liga, the Russian Premier League, and the English Premier League, all have the lowest amount of parity. Here's a summary table of R^2 values for the 7 leagues I looked at.

And in parting I will go out and say that, for me, even before going into looking at all these numbers, I think following the Bundesliga or Liga MX is a lot more exciting than the Premiership or La Liga or Serie A or anything (I should have looked at the Serie A numbers I guess though...). But if MLS is really looking to foster an environment where every team has a real chance at the start of each year, perhaps we should be looking more at the German and Mexican model rather than just assuming that everything about the English game is the right model to shoot for. And don't get me wrong, I think that the English Premier League has some of the best and most entertaining players in the world. But for unpredictability over the course of a year, there's a lot to be desired, as who will challenge for a title and who will be fighting relegation is more or less a foregone conclusion before any games have even been played...

Going back to the original question though, has this year been an aberration in the Premier League? Are things really starting to turn around? I went ahead and plotted results for 2013-2014 thus far against results from 2012-2013 and the R^2 value for that simple comparison was 0.48. So, while there seems to be "more parity" in the Premiership this year, it's still the least parityful(is that a word?) or "fair" league of the 7 that I looked at... So I'd be willing to say, no, despite Manchester United sitting in 6th, there really haven't been a lot of surprises so far this year. Even Manchester United in 6th after Alex Ferguson's retirement isn't really even all that surprising, is it?