The United States will have to face off against some of the world's best in Group G of the 2014 FIFA World Cup.

Why couldn't it have been Group E?

Instead, The United States have been placed in one of the toughest groups in the 2014 FIFA World Cup, drawing into Group G with Germany, Ghana and Portugal.

The Yanks will open their tournament on June 16th against Ghana, who knocked them out of the last World Cup in the round of 16. They will then play Portugal on June 22nd before closing out the group stage with Germany on the 26th. The opening match of the tournament will be June 12th with Brazil playing Croatia, as is the custom for the host to open the tournament. During the group stage, MLS will be taking a two-week break to accommodate for the players who will be representing their national teams next summer,

Here is the full round of groups, courtesy of ESPN. 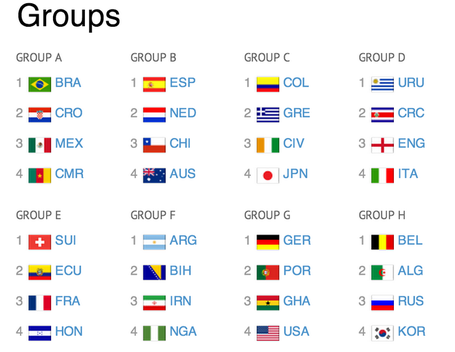 There are some very intriguing match-ups in there, such as a rematch of the 2010 World Cup final with Spain and Holland meeting up in Group B. There's also the England match with Italy that will debut both of the teams in Group D. Group D or Group G can both be given claim to the "Group of Death" with Group E seemingly the easiest.

Well, now we know what we're up against. The USA will have a tough time getting through the group stage but we won't know what this team can do until June. In the meantime, we've got an MLS Cup final to worry about.