After Zusi and Besler were called up to the National Team on Monday, Sporting KC will have to adjust their lineup for Saturday's match against New England Revolution.

Share All sharing options for: Sporting KC's lineup options are still aplenty with Besler and Zusi on national team duty

The United States Men's National Team roster was announced on Monday and contained the names of two Sporting Kansas City players: Graham Zusi and Matt Besler. While the two players will do battle against Costa Rica and Mexico in 2014 World Cup Qualifiers this coming Friday and Tuesday, respectively, Sporting KC will be left without two key parts of its lineup for its match on Saturday against New England Revolution.

This was not an unexpected turn of events. Sporting KC built up depth during the offseason for precisely this scenario, and we'll likely see what that depth can do this Saturday.

The diagram below represents the optimal Sporting Kansas City lineup, which shows a lineup without injuries or national team duties. 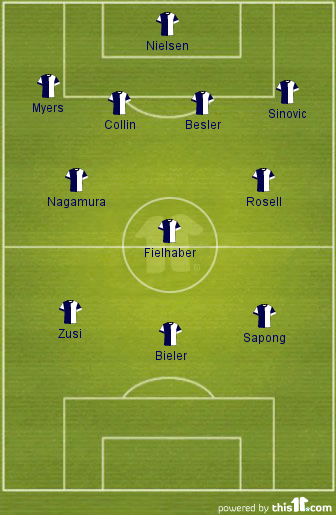 This saturday, Sporting will be without at least two members of its lineup in Zusi and Besler, and they may also be without Chance Myers as he is stilll recovering from a quad strain.

Luckily, Sporting has built a pretty deep bench for scenarios just like this. To replace Myers, expect Mechack Jerome to get the start as he did in the home opener against Chicago. Jerome was a very serviceable backup and played well enough to earn himself another spot start.

For Besler, the man who came in last year during Besler's appendicitis injury was Lawrence Olum. Olum will most likely get the call again to fill in at the centerback spot.

While two members of the defense are getting replaced for this Saturday, this biggest impact will probably be seen in the attacking part of the field. Without Zusi on the right wing, CJ Sapong and Bobby Convey will likely start on the either side of Claudio Bieler in the middle. While this is not necessarily a bad attacking line, it's certainly depleted without a national team regular like Zusi on the wings.

Here's how the lineup could possibly look for the Revolution match. 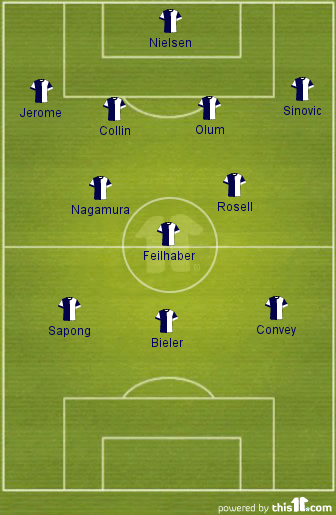 However, Sporting could go an entirely different route on the offensive side and possibly play a 4-4-2, which has been an idea thrown around for games like this. In that case, Bieler and Sapong would be the forwards, and the back line would remain unchanged. In the midfield, Sporting has a plethora of midfielders at their disposal to use for the fourth spot, including Michael Thomas, Josh Gardner and 2013 Superdraft pick Mikey Lopez.

In a case such as this, where Rosell and Nagamura would fill the spot the Gardner normally would, and that Lopez is still very inexperienced in MLS action, Thomas makes the most sense here.

Here is what that potential lineup could look like. 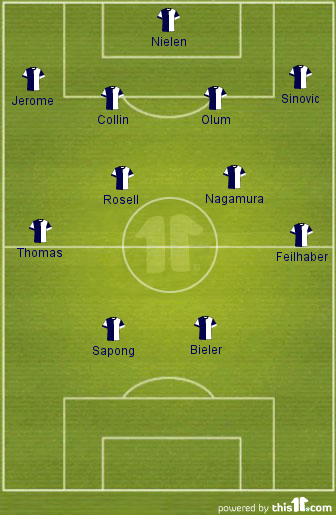 Whichever lineup Sporting puts out on Saturday, the work the front office did in the offseason makes the transition to a lineup without the national team members that much easier tactically. Zusi and Besler will certainly be missed, but the depth can certainly pick up the slack.