The 2013 FIFA U-20 World Cup in Turkey is upcoming this summer, and the 24 teams were drawn into groups of four on Monday.

Share All sharing options for: FIFA U-20 World Cup Turkey 2013: USA drawn with Spain, an African qualifier and France

There's no more drawn-out, excessively-funded grander spectacle than a FIFA World Cup draw. It doesn't matter whether it's at the full international level, (that doozy of an entire afternoon group stage draw will take place this December), or just a youth level tournament, it will take two hours to accomplish all of ten minutes of informational announcements.

Don't believe me? This is what they cooked up for Monday's U-20 World Cup draw, which for the record, is a soccer competition, which is about soccer, which is distinctly not this: 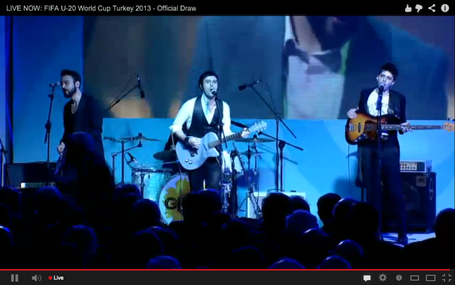 The soccer would not have stood alone and made it without that, I'm fully aware.

Anyway, the group stage draw did actually happen once all bad Europop bands finished all their songs that sounded the same to me their on-stage set. The 24 teams were drawn into six four-team groups for this summer's competition.

Results are as follows:

So, the U.S. was drawn with Spain, an African qualifier and France. The African team, yet to complete qualifying, will be one of Egypt, Nigeria, Mali and Ghana. That scream "group of death" as loudly as anything, to me. The U.S. U-20's will have their work cut out for them to finish top two in that group and advance from the group stage.

This relates specifically to Sporting Kansas City because the club's 2013 first round SuperDraft pick, midfielder Mikey Lopez, was a part of the U.S. U-20's qualifying team and almost certainly figures to be a member of the country's roster for this summer's final competition.

Lopez missed the first half of Sporting KC's preseason during the 2013 CONCACAF U-20 Championships and America's five game schedule, which saw them finish runners-up after a finals loss to Mexico. Lopez appeared in 4 games for the U.S. U-20's in the qualifying stage, 3 of which he started.

Four CONCACAF nations qualified for the tournament; Cuba and El Salvador are the others representing North and Central America.

This summer's tournament will run from June 21 to July 13, following up to a two-week training camp for the U.S. Early June has two consecutive open dates for all clubs with respect to the 2014 World Cup qualifying schedule. Thanks to that, Lopez will miss significantly less time for Sporting KC. A total of five MLS games fall between June 21 and July 13.

Lopez has yet to make his debut for Sporting KC through just four games, but has been listed as an available substitute on the bench in each of the last two games against Chicago and New England.