A goal and an assist on Claudio Bieler's debut is a good sign, isn't it? Actually, that's right.

Newly signed designated player Claudio Bieler bagged his first goal, and arguably should have been credited with a secondary assist on another goal, on his Sporting Kansas City debut on Saturday against Philadelphia Union. The goal and the assist weren't the only positive signs from the 28-year old Argentine-born Ecuadorian forward, though.

Bieler was signed in the offseason to fill in the missing piece, or so many said, from Sporting KC's unsuccessful 2011 and 2012 seasons: provide expert finishing inside the box on a multitude of missed chances the last two season, and score roughly 15 goals. Saturday certainly saw Bieler take the first step towards the latter target of 15 goals on the season, it was perhaps the former, and a little something extra elsewhere, that really made his debut a promising performance.

Active everywhere, and more involved than expected. The scouting report on Bieler was that, on the up side, he would be an assassin inside the box and finish a majority of chances coming his way from 18 yards and in. That was evident on the goal he scored - a pinpoint strike, low and to the far post - but roughly half of Bieler's touches and completed passes came much deeper, closer to the halfway line than one would expect from a poaching center forward. Bieler's work rate was quite high for an out-and-out striker, and he completed over 75 percent (15/19) of his attempted passes. Many were lateral passes, or even in the backwards direction, but that showed a willingness to get involved in hold up play and link with teammates. 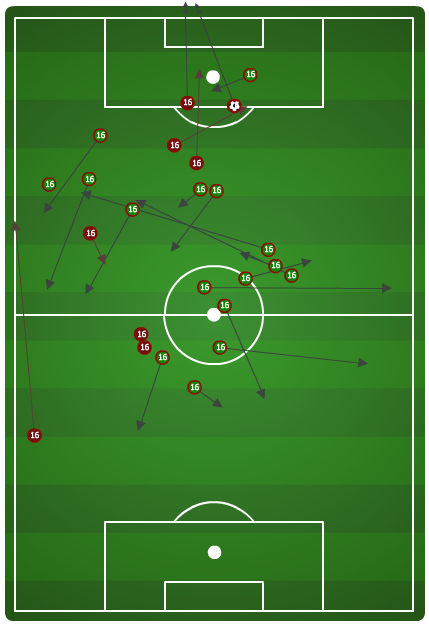 I was told by someone who watched a lot of Bieler's Copa Libertadores performances - which is a good level of competition for comparison's sake to MLS - that he had a tendency to drift in and out of games a lot, a la Fredy Montero of Seattle Sounders the last few years. That's well and fine if you put away the chances that come your way throughout 90 minutes - which Bieler did as well - but there weren't many signs of drifting out of the team on Saturday. The above Chalkboard indicates as such.

Peter Vermes was certainly happy. "I'm glad that he got his goal," Vermes told MLSsoccer.com after the game. "That takes the pressure off so people won't be asking that question. Now he can really get down and focus on playing for us."

Vermes said all through the preseason, "give him time, give him time"; well, Bieler didn't need time to settle in and notch his first goal.

That's a finish that the like of Kei Kamara, CJ Sapong and/or Teal Bunbury don't take so well the last two seasons, and that's not a dig at them, but a huge credit to Bieler. While lots of forwards in MLS would try to redirect that on goal with their first touch, Bieler controlled it first time - with what was actually not a great first touch - recovered himself, got over top of the ball well, and finished like we were told he could.

Don't be fooled by strong debuts, though. It's tough when a player shows well in a debut performance to not let the hype machine rev up and spiral out of control. After all, Omar Bravo scored a pair or goals - although, neither as impressive as Bieler's on Saturday - on his debut in 2011. Bravo finished the season with only 9 goals, and many would say to this day that the Mexican was a disappointment in Sporting Blue. On the other hand, in just one game Bieler has already exceeded anything that designated player bust Jeferson did in 2011. In that regard, praise Bieler all the way until this Saturday against Toronto FC.