Last weekend was First Kick in Major League Soccer and it was also the primary gathering of statistical analysts in sports from across the county at the Sloan Sports Analysis Conference at MIT. Sportswriters and broadcasters are continuing to use advanced statistics more often in articles and during telecasts. There is no denying it now, sports analytics have become mainstream.

The title of this post honors Sporting Kansas City's own Performance Analyst, Rui Xu. SKC like many other Major League Soccer teams have embraced analytics in soccer and employ a performance analyst on staff. With MLS's partnership with Opta Sports, analytical soccer data is now available to the masses and amateur stats geeks like myself have begun to sprout up. Statistical analysis of soccer has historically been very difficult because only basic stats like goals, shots on goal, fouls, corner kicks and possession have been available. Statistical analysis of sports like baseball and basketball is much easier because there are many more measurable events that occur in a game like two and three point shots or a baseball at bat.

StatDNA's blog The Technical Area took an interesting look at "the statistical argument for using short goal kicks more." In the EPL data they analyzed, 90% of the goal kicks were long aerial kicks. During those kicks the offense retained possession 49% of the time and the defense controlled the ball 51% of kicks. When the keeper passed the ball short to a teammate, the offensive team was able to maintain the ball past midfield at a rate of 93%. In their data set the offense turned the ball over 23 times in their own half, but no goals were scored by the opposition. 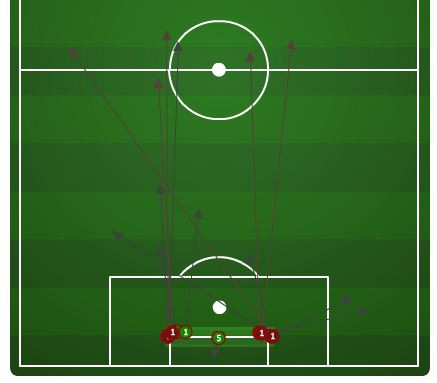 Sporting KC had the first touch (or head) on only 1 of 6 long goal kicks and on the header they won they lost possession. They were able to gain control of 3 of the 5 balls that Philadelphia got to first.

The sample size of only one game is obviously very small, but it is interesting to see that Sporting kept 58% of their goal kicks short. Kansas City was able to retain possession on all five first half short goal kicks. The Union seemed to make a half time adjustment and pressed higher on goal kicks in the 2nd half and SKC was 0 for 2 in getting short kicks across midfield after intermission. It will be interesting to see how Sporting KC continues to use the short goal kick on Saturday against Toronto. No goals were scored or conceded on Saturday in the build up after a goal kick, but we will keep a close eye on this in the next few weeks. Only time will tell if other coaches press high to defend against the short kick or if they will be content to let SKC pass it out of the back.