Sporting KC vs. Toronto FC, beating TFC: pass through the middle and win

There's not question about the fact Sporting KC can beat Toronto FC with a solid gameplan on Saturday. He's a big chunk of that tactical plan.

Share All sharing options for: Sporting KC vs. Toronto FC, beating TFC: pass through the middle and win

Sporting Kansas City take on 2012 Eastern Conference cellar dwellers Toronto FC on Saturday (12:30 p.m. CST, KCWE-TV, 1510 AM) at the Rogers Centre, Ontario. Sporting KC were victorious by the score of 3-1 over Philadelphia Union in Week 1 of Major League Soccer 2013, which TFC dropped all three points in a close encounter with Canadian rivals Vancouver Whitecaps, 1-0. The three points on the line Saturday afternoon are vital to each's sides 2013 ambitions, no matter the gulf in class.

The Reds were not only bad in 2012, but historically bad. It takes quite a concerted effort to finish a 34-game regular season with just 23 points (0.68 points per game, as opposed to Sporting KC's 1.85 ppg - 63 points), but Aron Winter and Paul Mariner's boys found a way to get the job done. Winter was fired in early June and Mariner, the man who helped construct the putrid squad of players that got the head coach fired, took the reigns and won just 20 of a possible 72 points to finish the season.

While that was bad enough to make a large chunk of Toronto fans call for Mariner's job then and there, the club chose to keep him on board for the 2013 season and stick with their guy. Until they didn't. Ryan Nelsen, who was a starting centerback for Queens Park Rangers in the English Premier League up until February 1, was named the club's new head coach. On January 7. Preseason began for TFC on January 20.

Despite the crazy levels of craziness in the T-dot (that's what they call it themselves), and not to mention a roster turnover of nearly half the club's players - including leading forwards Eric Hassli, Ryan Johnson and Joao Plata - TFC gave a good account of themselves as a newly reconstructed side on opening weekend. The Whitecaps struggled to break down the resolute Toronto defense, and it took a quick, concise, outside-in passing sequence to create the lone goal of the game.

Setting up against TFC, and how to beat them:

Admittedly, the late addition of Nigel Reo-Coker made the Vancouver center of midfield one of the team's strongest units heading into 2013, but what the Whitecaps were able to do against Toronto last week through the heart of their opponent's formation was what ultimately won the three points. The midfield trio of Reo-Coker, Gershon Koffie and Jun Marques Davidson - who played a combined 225 minutes - completed 122 of 141 passes (86.5 percent), many of which came from the center of midfield and reached into all areas of the field by the latter two players who each played the full 90 minutes.

The trio also recovered the ball - often times 50-50 challenges in which either team has a fair enough chance to win the ball back - 23 times, compared to TFC's three in midfield - who totaled 255 minutes - who won the ball just 15 times. Of all the duels contested across the entire field, things were split just 51-49 percent in favor of Vancouver, so bossing the midfield in this fashion made Vancouver the dominant team over 90 minutes. 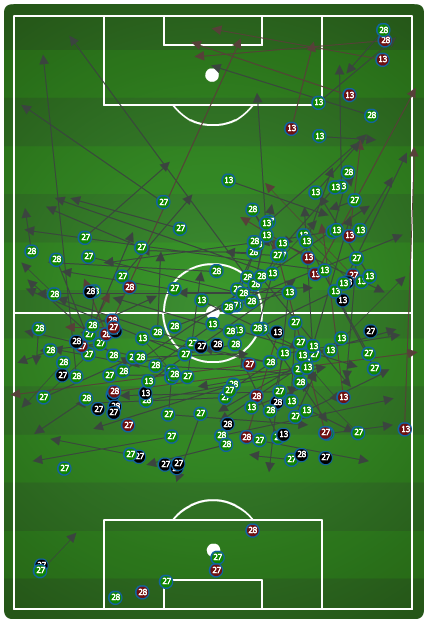 For comparison's sake, Kyle Bekker, Terry Dunfield and Jeremey Hall completed just 132 of 174 passes (75.9 percent) and made the 15 recoveries.

TFC played with a lone striker - newly signed Robert Earnshaw - for 75 minutes in the game before sacrificing Dunfield with 15 minutes to go, in serious need of an equalizer. Playing at home this week, Nelsen will be much more likely to give Earnshaw a partner up top, or at least a midfielder pushed higher up the field playing just off the Welshman, from the opening whistle. And, anyone who knows anything about soccer knows that the three-man midfield in Sporting KC's 4-3-3 wins the lion's share of possession and controls the game against the 4-4-2.

Which is, in short, the key to success for Sporting KC on Saturday. The midfield three - likely to be unchanged from Oriol Rosell, Paulo Nagamura and Benny Feilhaber - of Sporting will look to achieve the same things against TFC that they were so successful the final 60 minutes against Philadelphia. The one threat for TFC in this situation would be Ryan Johnson or Joao Plata - a couple players who can really motor up the field - being sprung on a counter attack with a long ball over the top. But, oh wait, Toronto traded their two most versatile forwards in the offseason, so what are they to do? In all likelihood, punt and pray.