How Teal Bunbury fits back into the lineup

Teal Bunbury will add to the multitude of forwards when he returns from injury later this summer.

Share All sharing options for: How Teal Bunbury fits back into the lineup

Sporting Kansas City already has a good depth of strikers. Teal Bunbury will make a welcome addition to that list later this season when he returns from his injury.

On August 26th of last year, Teal went down with a torn ACL against New York Red Bulls after being a crucial part of a goal. Since then Sporting has stocked up on good strikers, most notably Claudio Bieler in the middle. Also the emergence of Jacob Peterson and Graham Zusi as good wingers has added to the list of striking depth.

So where does Teal Bunbury fit amongst these strikers? Well there is a number of possibilities. The first is going the CJ Sapong route and starting on the wing in the place of Jacob Peterson as show below. 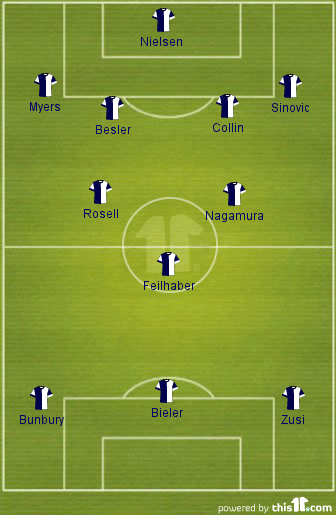 Another possibility is to drop Zusi back to the midfield and start Bunbury opposite Kamara on the wing. The only problem with this formation is that it 1) Sends creative playmaker Benny Feilhaber to the bench or 2) Leaves Sporting KC with only one holding midfielder. In this scenario, I'd prefer that Feilhaber is benched so that the defense is not left vulnerable with only one holding midfielder to protect them. 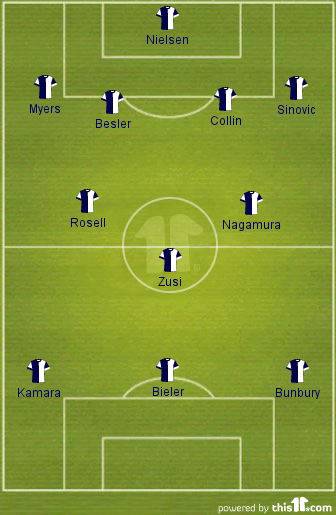 These lineups, however, only reflect the league matches. While I do think Bunbury will be seen in some capacity in league matches, his playing time wil not be what it once was. More often than not he will probably be used as a second half sub for a tiring striker but his availability as a starter will come in handy when Graham Zusi is called for national team duty or if Kei Kamara is bought in the summer transfer window.

Where Bunbury will be seen most is during the US Open Cup matches and CONCACAF Champions League matches. The striker depth that Sporting has will create a formidable front line going into those matches. My ideal lineup using the reserves is featured below. 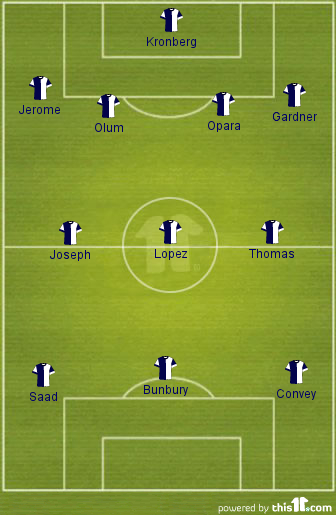 This allows Sporting to field a very good lineup while still balancing the roster in a way that keeps the starters fresh. Regardless of which variation Peter Vermes decides to use, the addition of Teal Bunbury when he returns will certainly be welcome as it will give Sporting even more options to use in their upcoming competitions.