Reconfiguring Kamara back into the Lineup

With the news that Kei Kamara will be returning from his loan at Norwich City, Peter Vermes will have to figure out how he will set up the starting lineup.

Share All sharing options for: Reconfiguring Kamara back into the Lineup

Kei Kamara is coming back to Kansas City after his three-month stint at Norwich City did not produce a full-time EPL offer. Kamara will return to Sporting KC for the time being.

In the first nine matches for Sporting, they've stayed with more or less the same type of lineup. Using the 4-3-3, they've had the lineup shown below. 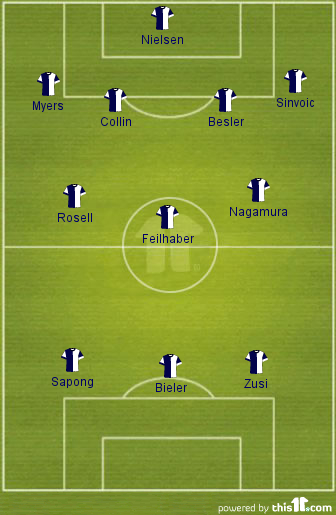 With Kamara back, Vermes will want him back at his old position on the wing. Kamara is always a threat for double-digit goals in a full season, so his presence on the wing is essential. The question becomes, who's spot does he take?

The first option is with the lineup shown below. Kamara would oust CJ Sapong, who out of his natural position on the wing since his center forward position is taken by Claudio Bieler. In this scenario, CJ Sapong would be relegated to the bench and would come on as a super-sub either on the wing or for Bieler. 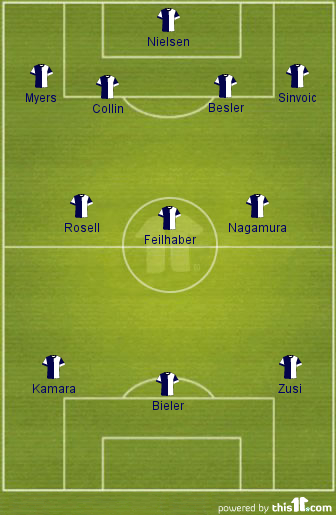 The biggest benefit to this lineup is that it keeps most of the lineup intact with only one person being changed. The team has had nine matches to gel and they have looked more cohesive as the season has gone on. By keeping the midfield intact, it keeps team chemistry up. The players are more familiar with the routes their forwards and fellow midfielders are taking, and attacking play is better overall.

The downside is that it keeps CJ Sapong on the bench. Even out of his natural position, Sapong is too good to only be used as a substitute. In this scenario however, that is the only option.

The next scenario involves more movement around the field. It would involve Kamara taking over Graham Zusi's spot on the wing, and Zusi moving back to the midfield. This time, it would be Paulo Nagamura moving to the bench, a much better option than moving Sapong to the bench. 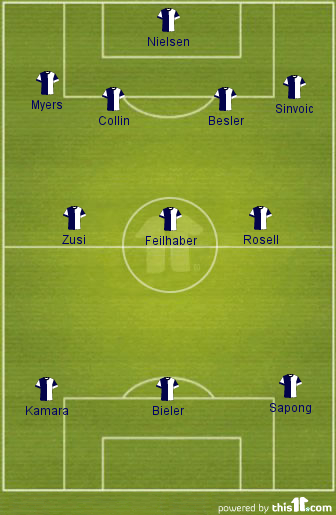 This keeps Sapong in the lineup and moves Graham Zusi back to his position as midfielder. It gives the midfield two creative playmakers in Zusi and Feilhaber, and all should seem right.

However this would hamper the team chemistry in the midfield that the first option works to keep. We haven't seen this midfield combination ever because Zusi has been on the front line for the entirety of 2013. It would most likely take a couple of matches for Zusi and Feilhaber to gel into a cohesive midfield. Having two creative playmakers would be much different than just the one in Feilhaber.

There's different variations that Vermes can take with these two options. The most notable being Jacob Peterson taking the place of CJ Sapong on the wing and Kamara on the other side. This works because it gives Sporting two natural wingers and a natural center forward. Soony Saad and Bobby Convey could also be candidates for Sapong's striker spot.

Regardless of how Vermes does the lineup with Kamara back, it's almost certain that he will feature Kamara on the wing. While we probably won't see him until Wednesday at the absolute earliest, it will be nice to have a natural winger back in the lineup.