The National Women's Soccer League has released its television schedule for the 2013 season, which features an FC Kansas City-Portland Thorns match on August 4th.

Earlier this year the National Women's Soccer League announced they had signed a deal with Fox Soccer to nationally televise several matches throughout the NWSL season. Today they released the schedule, which features one FC Kansas City match.

The Blues will travel to Portland on August 4th and the match will be featured on Fox Soccer Channel in the Blues' only scheduled match of the season. Portland, Seattle, Western New York and Washington are all featured in multiple matches. All teams, however, are featured in at least one match.

The last time that the Blues met with Portland it was a 4-3 thriller in Portland and there was a 1-1 draw in the opening match of the season. It should be a good match to be nationally televised.

Other matches that are part of the deal include the NWSL semifinal matches and the final in late August. The top four teams in the league will qualify for the playoffs and will be in those national televised matches.

Here is the full schedule for the nationally televised matches. 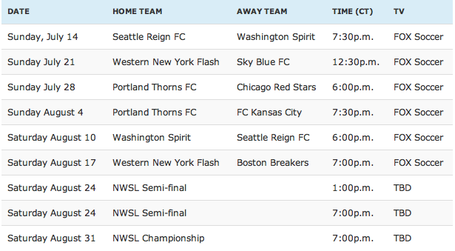 In other Blues news they added three players to the roster for the matches against Chicago this week. Natalie Norris is a defender who is fresh out of college from Utah State. Jaime French is a forward who scored 48 goals and provided 31 assists in her career at Wheaton. Finally Missy Geha is a local product from Saint Thomas Aquinas High School and Kansas University. She normally provides the color commentary on the Blues' live YouTube stream.

All three players will be available for FC Kansas City for tonight's match in Chicago and for Sunday's match against the Red Stars at Shawnee Mission District Stadium.