Replacing Kei Kamara for the rest of 2013

Share All sharing options for: Replacing Kei Kamara for the rest of 2013

With the sale of Kei Kamara to Middlesbrough FC, Sporting is in the same predicament they were for the first two months of the season. They need to find someone to competently replace Kei Kamara's production at the wing. Seems easy enough with the talents of Soony Saad, Graham Zusi, Jacob Peterson and CJ Sapong all waiting in the wings to form a marginal combination of wingers to complement Claudio Bieler in the center.

However it's not that simple. Matches like Saturday's in Columbus will feature a bench without Zusi due to national team duty. This will probably happen again in October where Sporting has a match against Houston two days before the US takes on Jamaica in Kansas City. So there's two matches without Zusi out of the seven Sporting has left. Then there's factors such as the final Champions League matches in September and October, adding to the number of matches the depleted forward ranks will have to produce in.

Let's look first at the game against the Crew. Sporting will be missing Zusi to the national team and Dom Dwyer to Orlando City for the weekend. Here's what the lineup could look like for Saturday. 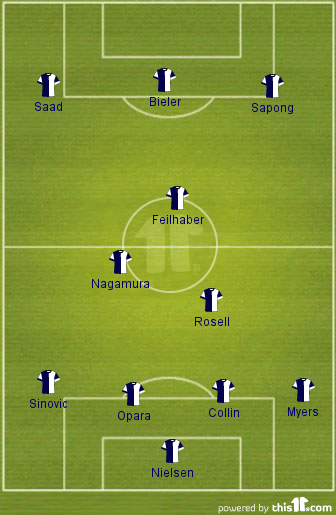 This starting XI is the most optimal given the current injuries and players absent with the national team and Orlando City. Sapong and Peterson are interchangeable on the wing, but there's not much else to do with this scenario. A bench with Peterson, Kronberg, Bunbury, Lopez, Olum, Gardner and Ellis gives Vermes some good options heading into Saturday, but not nearly as many as with all of his players back.

Going forward, the return of Paulo Nagamura is perfectly timed because it allows Graham Zusi to take over the wing spot he had when Kamara was at Norwich. Zusi is very good at the position and Soony Saad's emergence as a strong presence on the opposite side gives Sporting a better forward core going forward.

Also, Benny Feilhaber's resurgence in the midfield makes me more comfortable about leaving him back with Rosell and Nagamura while moving Zusi to the wing. As long as Benny keeps his form up, the lineup will still be pretty good. Here's how I would make it. 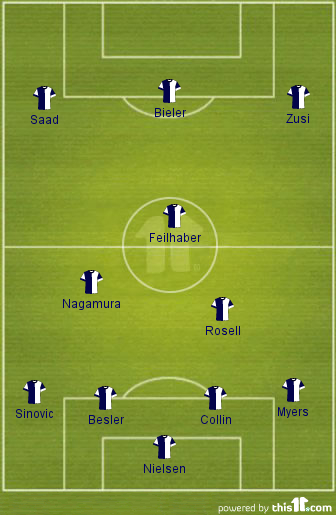 This is the optimal lineup for the rest of the seasons and the playoffs. In regards to Champions League play, Kamara's absence doesn't factor in too much since he didn't play in either away match. Plus, the return of Nagamura means that no bench player needs to come up to the starting lineup, Vermes just needs to variate the positions as seen above. For the Champions League matches, the lineups will probably be similar to the first two games with no need to worry about exhausting the players.

All in all, Sporting will be alright without Kamara. Yes, they do lose an aerial threat and a threat in the box but Zusi can manage in his position. Sporting KC will be fine as the 2013 season draws to a close, but