Grab some popcorn, it's time to talk about Sporting KC and their recent match with the Columbus Crew.

Claudio Bieler ended his scoring drought against Columbus, converting an early penalty kick after Feilhaber's effort to earn it. It was his first MLS goal since July 13th against Toronto and it was his ninth goal of the season. He also had three shots this game, which ties his past three starts combined. However he still hasn't scored in the run of play since that Toronto goal, which is what Sporting brought him in to do. I believe part of that has to do with Kamara's presence on the wing these past four months and his aggressive nature in bringing the ball into the box. By moving Zusi back to the wing, or the Sapong/Saad combo that was used this past week, I see more chances coming Bieler's way similar to the first two months of the season.

I see Bieler getting 2-3 more goals the rest of the season, not including playoffs. Hopefully next year they can work on getting the ball to Bieler more so that his full potential can be released.

2) Feilhaber was a beast

Benny Feilhaber has been doing very the past few matches in holding down the midfield while creating good chances. His efforts in the sixth minute were responsible for Sporting KC's first goal with Claudio Bieler's penalty kick. He was a force in the midfield and kept the game in the attacking half. Take a look at his heat map from this match. 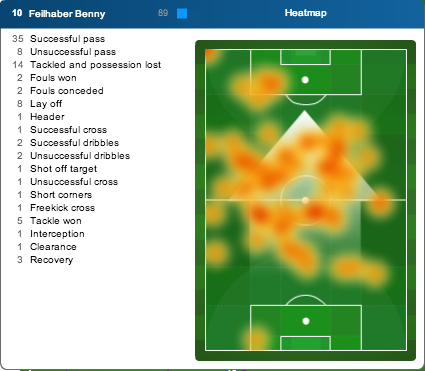 As you can see, most of his touches were in the midfield or up towards the box. This is a stark difference from one of his worst games at the beginning of the year against the Revolution in New England. 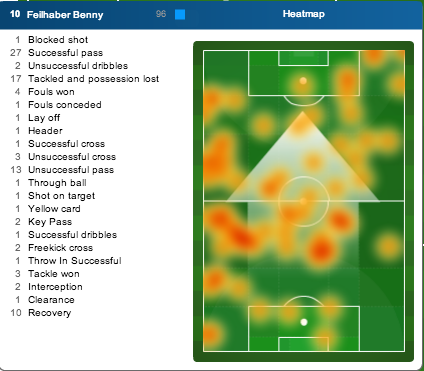 In this map, Feilhaber was all over the place. The touches weren't concentrated in a certain area and his strengths weren't released. In both of these matches, Sporting was missing Zusi so the main form of midfield production fell on the shoulders of Feilhaber. In this match against Columbus, Benny had more successful passes, less possession lost and more tackles won. Obviously there's more samples to choose from throughout the rest of the season, but the difference in these two matches really makes me feel better about the Feilhaber signing.

3) The race for the Shield is on

Looking at the standings right now, it would look like Sporting isn't in too favorable of a position to win the Supporters Shield. Montreal, New York, Real Salt Lake, Seattle, Los Angeles, Colorado and Portland all stand a reasonable chance of taking the Shield at the end of the season. However, looking at the schedule for Sporting KC, it makes sense that they may be able to pull of a string of wins as the season winds down. Take a look.

Ignoring the Champions League matches, Sporting have six matches left in the season. So far, they are 6-1-2 against these teams and have outscored them 17-7. To win the Supporters Shield, I would say that Sporting needs to win 4-5 of these matches and tie the other ones. While that kind of performance would take two straight months of good soccer, the opponents provide a good opportunity for Sporting to pull it off.

And if Montreal and New York could go on massive losing streaks, that would be ok.