Show Me the Money and/or Results

Taking a look at salary and performance over the last 5 seasons to determine just what impact, if any, large budgets have on a club's success.

Share All sharing options for: Show Me the Money and/or Results

So, Toronto just sort of dropped the mic on MLS, huh? Pretty exciting, I think, and definitely good for the league. Good for Toronto's fans? Maybe. All things being equal, do they want to just see Jermain Defoe and Michael Bradley play, or do they want to see TFC win, and these guys are just a means to that end? I'm inclined to believe the latter.

So first off, in a league with a hard cap, and where salaries are largely paid for by MLS rather than the team, nearly everyone spends enough to push right up against the cap. Without the DP rule, this would make the analysis just about pointless. Since everyone spends the same, and we know results differ for each time, sometimes dramatically, over the season, it doesn't seem like there'd be much correlation between money and results. But, to check that, I went ahead and plotted salary z score (how far a teams salary is from the average salary) against points per game z score (how the team did on a game by game basis compared to average) for the last 5 seasons. 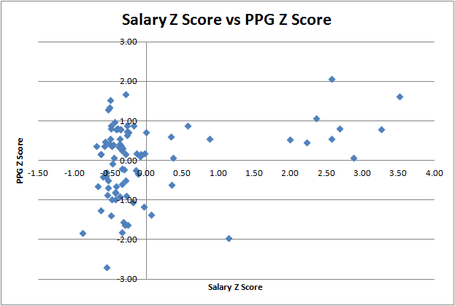 Everything on the left is about what you'd expect from a league with a hard cap. Results are spread out up and down while everything is clustered in a narrow band horizontally. 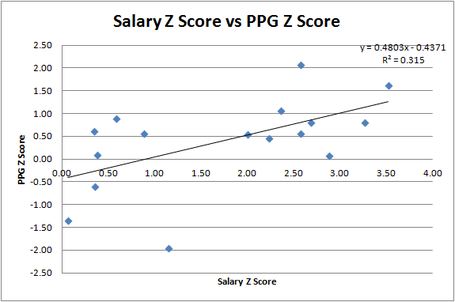 You'll notice there is a slight upward correlation, but only slight. An R^2 of 0.315 implies some relation between money and results though, and I think it's worth noting that, of the 16 times teams "went big" with their spending, they finished above average 13 times. The three teams that didn't? 2009 New York, 2010 Toronto, and 2012, Toronto again.

Maybe we should exclude Toronto and NY's poor seasons from this analysis due to poor "management"?

So I'd say, more often than not, splashing down money on a big signing, in general, cna help one's team get results. The data set is small though, and only consists of a few teams, and from that small dataset, Toronto does NOT have a good track record... so while there's room to be optimistic, and the numbers seem to suggest that there can be some expectation of an above average season when big players are on your team, I'd still be a little wary if I were from Toronto... if there's one team that's shown it can mismanage it's marquee players, it's them.

With all these numbers I decided to take a quick look at how much each team spends for each Point Per Game. The results are... not at all surprising, actually. LA spends about $6.37M for each PPG, over the last 5 season. New York is second at $6.25M and Toronto is third at $5.55M.

Here's the table. Lower is better.

So I think that, while there's some good underlying numbers that suggest spending lots on players results in a team generally performing above average, it's by no means a sure thing that having high priced players on a team's roster will guarantee they go top of the table. Would I want Bradley and Defore at Kansas City? Sure.

But if it means sacrificing other things like player development and scouting and player retention? Maybe not so much then...

I think next year is going to be an interesting one for MLS. If TFC manage to dramatically turn their team around, I expect a lot more teams to pursue the "Go big or go home" strategy. If not, maybe we see a refocus on player development and retention...