So You Want to Play in MLS?

How does draft position impact salary? How about playing time? Let's take a look.

Share All sharing options for: So You Want to Play in MLS?

So given all the wage discussions that have been floating around lately regarding minium salaries, salary cap, the upcoming CBA, etc., I thought it might be interesting to see how player salaries correlate to their draft position. I actually thought about this last year as well, and so had more than half my work already done, which was a nice little bonus.

Basically, since MLS salaries are public knowledge, it's easy enough to sort through what position a player was drafted at, find out what their starting salary was, and see if there's a relationship. Probably not surprisingly, there is, and it's a pretty good one. 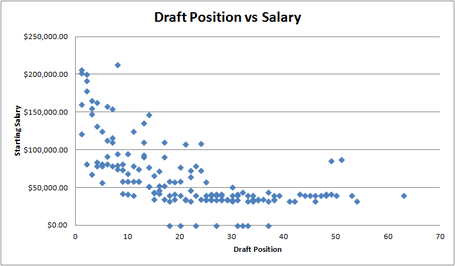 Drop a logarithmic fit on there and you wind up with an R^2 value of 0.58. So pretty good! You'll note player salaries start to bottom out at the league minimum around pick #25. So first round guys will likely make above minimum wage, but second round and beyond and there's a good chance you won't be making much more than the floor.

Two interesting blips towards the end there. Those would be two keepers taken in 2010, Sean Johnson and Brian Perk.

Perhaps this isn't surprising. But I think it does shed a little bit of light on the fact that the draft isn't entirely useless. First round guys can command a good enough salary.

"But wait!" you might say, "Salary isn't contribution!". You're so right. As always.

Here's how much players played in their first year after being drafted. 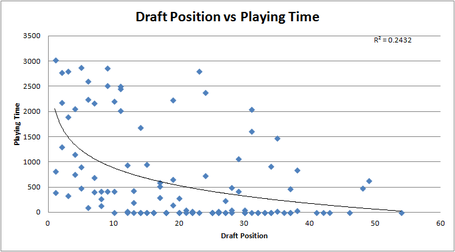 Again, there's a pretty clear logarithmic trend there, though not as obvious as the salary correlation. R^2 of 0.24 suggest the relationship is weaker, as well.

The bigger question may be, how does draft position correlate to future salary and future playing time?

The good news is, with MLS data being publically available, that's an answer question. The bad news is, that's an article for another time...