FC Kansas City acquired Amy LePeilbet from the Chicago. The Red Stars receives FC Kansas City's first round draft pick in the 2015 NWSL College Draft and one of the team's international player slots for 2014. LePeilbet was allocated to Chicago for the inaugural NWSL 2013 season but did not play for them because on an ACL injury.

"I am excited to be here in Kansas City," LePeilbet said after practice. "It's a new journey for me, the next chapter. This is a great team so I'm looking forward to this opportunity."

When asked about her thoughts on the team after being here a couple days LePeilbet responded, "A lot of great players here but not only are they great players, but I feel that they are great people so it's fun to be out here with them." 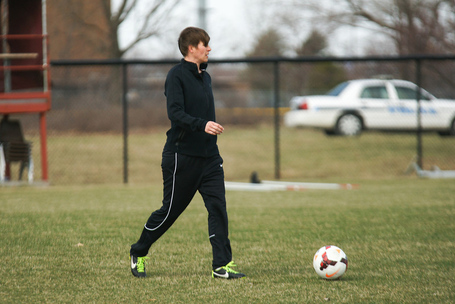 She give the Blues some flexibility as she can play center back or outside back. "I'm willing to play anywhere they need me," LePeilbet stated. "If it's backing up players, I'm there. If it's playing in the center I'll jump in, if it's on the outside, I'll be happy anywhere."

What about striker? "I don't know that they would want me at striker, I would have fun up there but I don't know if I would do any good," LePeilbet laughed.

LePeilbet has 84 caps with the U.S. Women's National team and was a member of the 2012 gold medal winning Olympic team and the silver medal 2011 Women's World Cup squad.