What's in a Preseason?

How much should we read into preseason results? A lot? A little?

Share All sharing options for: What's in a Preseason?

I, for one, actually like watching preseason games. I like the chance to see new guys. To see how guys look after the offseason. To watch a game being played where the end result doesn't matter takes away that element of... I don't know, stress? and let's me focus on just enjoying the fun of the game. Plus it's always nice to be able to feed the beast after months of not getting to watch my local guys.

Here's how I looked at it. 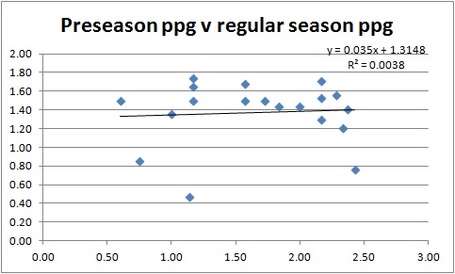 So surficialy there seems to be no relation between preseason and regular season results for the 2013 season. Is this because preseason matches are padded with the likes of playing against foes like the USMNT U17s and FC Tucson? It doesn't seem to be. I pulled out only results for MLS vs. MLS teams and the results look basically the same. Here's that chart. 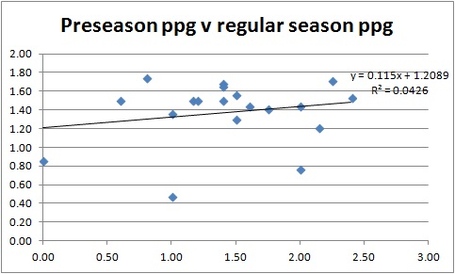 In 2013, 8 teams had correlated preseasons and regular seasons regarding above or below averageness. In 2012, that number was 9. So out of 19 teams, that's about the number we'd expect if there was truly no relation. This held true for both all results and MLS only results.

These results were the same for both the 2012 and 2013 seasons, both considering all preseason matches played for all MLS teams and only MLS team vs. other MLS team results. I've been trying to think of other ways to dice it up, but I think I've more or less convinced myself that, while preseason matches are an important means for a team to gain fitness and build chemistry, as well as try out new things and sort out who makes the final roster, the actual results of these games means very little. One should probably be careful before getting too excited, or deflated, based only on preseason form.

Maybe that's not surprising, but I thought it was interesting to see just how little evidence there is that preseason games can be used as any sort of predictor for the regular season.