Q and A with SKC's VP of Merchandise: John Moncke (also known as Sporting Style)

Tuesday night Sporting KC introduced their new secondary kit. Nearly two thousand people showed up to see the kit first hand and find out who is the 2014 Sporting KC Captain.

Q: First of all, why stripes?

John Moncke: We were looking at fashion trends. Even in here you see a lot of people wearing stripes. You look at our colors and they lend themselves to stripes and even part of our shield has stripes so it just made sense.

Q: Does the jersey have eleven stripes like the shield?

John Moncke: It does have eleven stripes but it depends on the size, the intention was eleven but depending if it is a 2X or a small.

Q: Why stripes and not hoops all the way around?

John Moncke: It just makes it easier to see the numbers, we really like our numbers to be in our primary color of Sporting blue. It would be difficult to do that if we extended the stripes around the back.

Q: Every other jersey was leaked, how did you keep it secret?

John Moncke: I can't tell you on the record.

John Moncke: We did see something a couple weeks ago that would have leaked this image. There were some teaser images that really showed the stripes so we had those scaled back to really focus on the new lenticular crest, if we hadn't of done that ours would have leaked also.

Q: The crest is different, how?

John Moncke: It's got a lot of shine to in but it's also got a three-dimensional look. Kind of in the background of our crest you will see a checkerboard pattern. We are paying homage to the Cauldron and our supporters that fly the checkered flags. 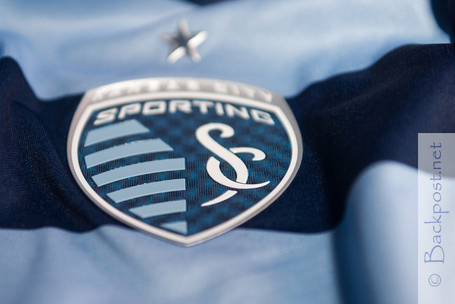 Q: Any little features people may not see right away?

John Moncke: On the inside, right by your heart, we have a really cool crest. It's the "For the Glory of the City" crest and I think you will probably see that on some other merchandise this year as well. 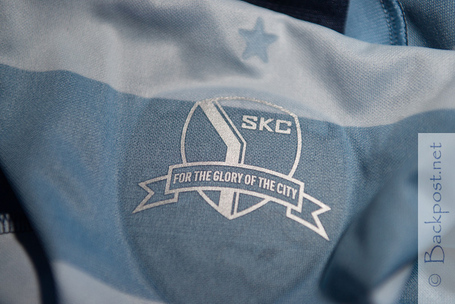 Q: There were split scarves sold tonight, one side with Sporting KC Championship 2013 and the other side with Kansas City Wizards 2000, why?

John Moncke: It's been three years since the rebrand and on this team we want to pay homage to our heritage. We had a positive result in 2000 with the Cup so it only made sense that we would do a split scarf with the two cups and I think you will see some limited edition Wizards/Sporting scarfs to follow this year. It's always going to be a tight supply on those. We're not going to flood the market with them.

Q: So I need to make sure I get one before their all gone?

John Moncke: Wait till you see the next one, I would say we have the mother of all scarfs in the works.

Q: Now that Sporting has success under their own brand, does it make it easier to recognize the Wizards history?

John Moncke: Absolutely, in 2011 when I joined the club people didn't really know what Sporting was. Now you can look at this crowd and it may be three times the size of the crowd at some Wizards games. Everyone knows what Sporting is, people know we used to be the Wizards, why not pay homage to the Wizards.

Q: When you have a couple thousand people show up to see the jersey unveiled, you don't have to worry about confusing the brand anymore?

John Moncke: We had to build the brand, the Sporting brand. Those of us on the brand team are pretty confidant the brand is solid now. That is not to say that we are going to rest on our laurels. We are going to continue to strive to do the best that we can. People know what Sporting is all about. They've come to expect this level of event and they expect a certain level of play on the field. It doesn't damage the brand to bring back the Wizards.

Q: Anything you have missed on or need to do better?

John Moncke: Something I talked about tonight is doing a lot better job with the women's business. We've got to be fashion right. We've got to have the right kind of fits, the right graphics the right fabrics and that is why we have come up with Sporting Club line that you are going to see this year.

Q: What would you want fans to know about creating these jerseys?

John Moncke: This is a two year process; we've been working on these jerseys for two years. Some people may look at it and wonder why it would take two years to come up with that but it's a very long process. We come up with concepts and fly out to see Adidas, they come to see us. We go through lots of prototypes to get all the details right. It's a long process and I am very proud of the look of this jersey. It's my favorite one. I will say that we've got some really awesome stuff in the works that you will see in the future also.

Q: How important is it for you, for Sporting to pay homage to the city and the fans?

John Moncke: For us, the fans are one of the most important assets we have as a club. One of the reasons we spend so much time on the fashion angle is that it shows that we care. For us to just release a jersey that has no pride, no heart, it's not Sporting. It's very important for us to get details within the jersey that harkens back to the fan. It's also important for us to just speak  design and bring the best design that we can because we think it shows that we care.

Q: With the popularity this jersey already has, will we see it encroach on the primary regarding the number of times we see it?

John Moncke: One thing you could not see tonight was the socks; we've got hoop socks that pulls the whole look together.

Note: The split scarf quickly sold out and over 300 (most of what was on hand) of the new secondary jerseys flew off the shelf as fast as they could take fans money.