Breakdown of a Breakdown: How Teal Bunbury scored on Sporting Kansas City

Share All sharing options for: Breakdown of a Breakdown: How Teal Bunbury scored on Sporting Kansas City

After Aurelien Collin was sent off in the 74th minute, Sporting Kansas City was at a disadvantage against the New England attack. Missing one of the best centerbacks in the league will always hurt, but that doesn't necessarily excuse the play from Sporting KC's back line that allowed Teal Bunbury to score the eventual game-winner. The penalty was a mess in it's own but the floodgates were already open because of this goal.

So, let's take a look at how the Revs got so open in the box and the collapse of Sporting KC's defense. There were several mistakes from different players, each playing a part in Bunbury's goal. 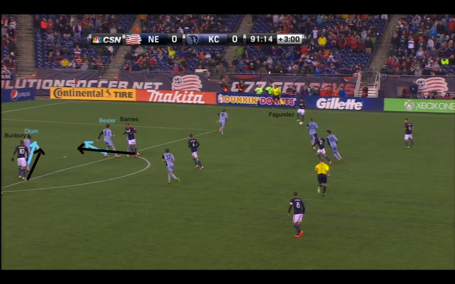 Here's the setup to the play where Diego Fagundez on the top of the screen is about to send in a cross. As you can see by the arrows, (Black for New England, Blue for Sporting Kansas City), The two Revolution attackers are about to make their runs to the inside of the Sporting KC defenders. Olum actually does a decent job here but Besler loses his man and therefore loses the opportunity to defend the ball. 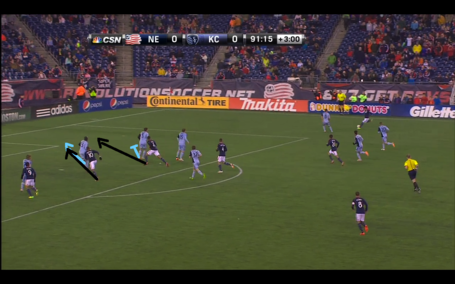 Here, Olum is following Bunbury but he's starting to head to the outside to try and catch an overshot cross. This is where Besler makes his biggest mistake, following the ball instead of Barnes behind him. Barnes slips in behind Besler and makes his run to get open. 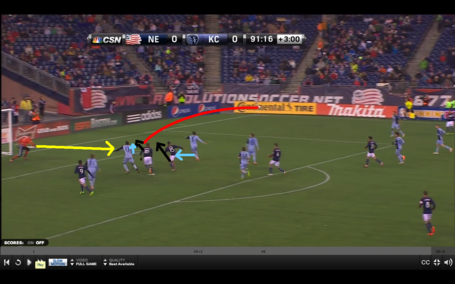 As the ball is in the air (the trajectory shown by the red line), you can see Besler trying to catch up with Barnes and the cross but he isn't able to get there. Eric Kronberg starts his big mistake, coming out to try and clear the ball before Barnes or Bunbury can get a shot on it. 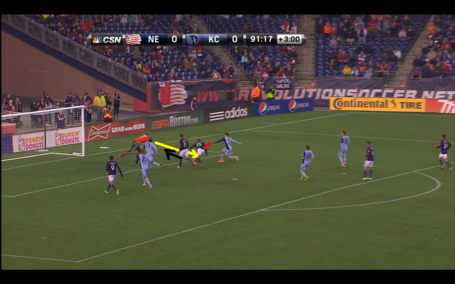 This is the pivotal part of the play where everything goes to hell in hand basket for Sporting KC. Besler is too far away to try and knock the cross away and Eric Kronberg completely whiffs on the clearance with his hands, allowing the ball the bounce over him and leaves the goal unguarded. 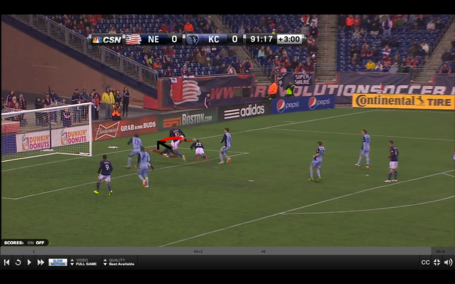 With the goal unguarded, Teal Bunbury is wide open to shoot the ball off of his thigh and into the net for the goal.

This goal has many culprits. First is Matt Besler, who did a poor job of guarding Barnes and allowed Fagundez to send in a beautiful cross out of reach of Besler. Kronberg makes a huge mistake by coming off his line, allowing Bunbury to have no resistance in his goal. He should have stayed back, noticing that there was no way Barnes was going to get a strong head on it, nor would Bunbury get too strong a leg on it. I realize that all of this is happening in seconds, but I bring it up because Sporting KC has been scored on like this before this season.

If Kronberg had stayed back, I truly believed he would have saved the shot or would've at least given himself a chance to stop it.

This was a rare dumb moment from one of the best defenses in the league. Hopefully Kronberg can learn throughout the season to stay back when he needs to, otherwise this won't be the last Breakdown of a Breakdown post.