We take a look at Dwyer's goal in the 63rd minute that gave Sporting Kansas City a 3-0 lead over Montreal.

After a Collen Warner red card in the 16th minute, the Montreal Impact were dazed and down a goal at home to Sporting Kansas City. Losing a midfielder against one of the better passing teams in the league, however, does not bode well for any team. We're going to see just how much that red card hurt the Impact in Dom Dwyer's second goal in the 63rd minute.

If you haven't seen it yet, take a look at the goal here to get a sense of what happens in the play.

As always, click on the pictures to enlarge them, the ball is following the red line and the arrows match the colors of the team. 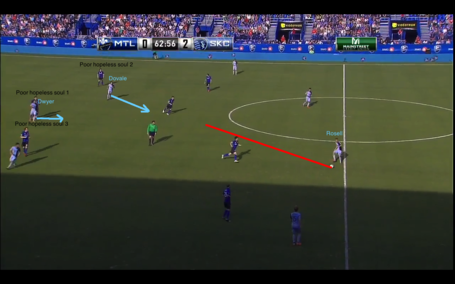 Here we see the field right before Dwyer makes his run and Dovale makes his pass. Each Impact defender has his man marked although Dovale has some freedom as he moves towards the anticipated pass from Rosell.

This is where the Impact make their mistake. Ouimette goes to try and take the ball away from Dovale, which leaves Dwyer wide open down the middle. 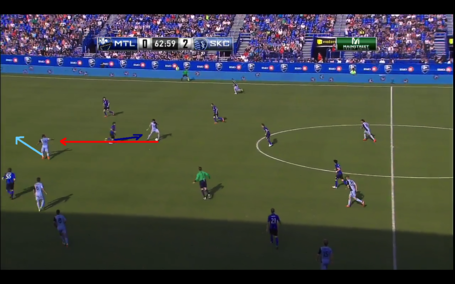 As Ouimette is attacking the ball, Dovale can see Dwyer make his run down the middle with no one in front of him. Dovale is going to lace a perfect ball right into Dom's path. 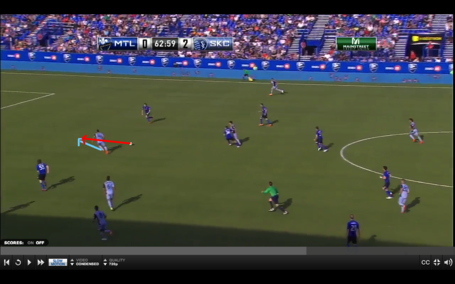 Here's a shot of just how much space Dwyer has in relation to the other defenders and the edge of the box. 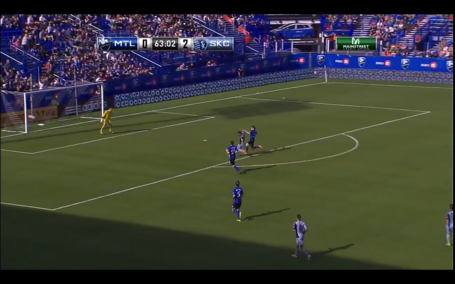 Perkins actually sets himself up well to try and block Dom's shot. It allows him enough space to block a shot from Dwyer's distance as he is surrounded by the Impact defenders while maintaining closeness to the goal. It takes a magnificent shot from Dwyer to go far post, off the post and into the goal. The precision was the most impressive part of the goal.

For what it's worth, the Impact recovered nicely from Ouimette's mistake and Perkins did what he could to block the shot. Dwyer's shot was just perfect and shows a lot more skill than at first look.