FC Kansas City ended Seattle's perfect record when the Blues and Reign drew 1-1 in Kansas City Wednesday night. Both Amy Rodriguez and Kim Little scored to stay atop the goal charts with seven each.

The Blues were playing their eighth game in 22 days and were fighting through some very tired bodies but managed to match the Reign throughout the match.  "I am happy that the players came out and played their hearts out, they're tired, they're fatigued and they come out and play 100% like it's their first game. I love it, I love the mentality and attitude of the players," FC Kansas City head coach Vlatko Andonovski said after the match.

"It was definitely a good game, we had a chance to get a good result," Andonovski continued. "There were a couple times we got a little bit scared with opportunities they created. They are a good team and every time we play them it's going to be a good game. You saw what happened there in Seattle and what happened here. The only thing is I question the penalty kick. I don't know if it was a penalty kick, we had a chance to look at the video at half time and it did not look like it."

Seattle Reign head coach Laura Harvey commented, "similar to last week, two good footballing teams and we are a little bit disappointed. We feel we could have been a little bit sharper considering we had a bit more rest than they did but if someone had said to me at the start of the season we would take four points off of Kansas City in our first two games I would have definitely taken that."

"As much as we are disappointed with that, for us it's a good reality check that we need to keep working hard on things and I have no doubt that Kansas will keep pushing and progressing," Harvey continued. "I am probably saying more than I should but I think they are a great side. I think it was a good footballing game and both sides were trying to win it."

FC Kansas City's goal came in the 42nd when Rodriguez received a pass from former Seattle player Liz Bogus. Rodriguez fought off the defenders while making her run towards goal launched a left foot shot that seemed to catch Reign keeper Hope Solo by surprise.

"I think she (Solo) got a tap on it and I think that really bugs her. It bothers goalies when they can touch it but they don't save it," Rodriguez laughed.

The Reign came right back just before the half ended and drew a penalty when the Blues failed to clear the ball, Seattle's Elli Reed collected and cut across the top of the box. It did not appear that significant contact was made by Blues defender Nikki Phillips but the referee did not hesitate to point to the spot. Kim Little stepped up and put it home to keep pace with Rodriguez.

The second half saw a lot of midfield battle with the seriously fatigued Blues fighting to build possession when they could. Both teams created a few more chance but little that was extremely dangerous.

Watch the video to see if it was a good penalty call by the referee starting about the 1 minute mark.

Part way through the second half, Rodriguez was upset with the referee. It appeared Seattle's Kendall Fletcher cleated her on the knee and no call was made.

This is when contact was made in the game. 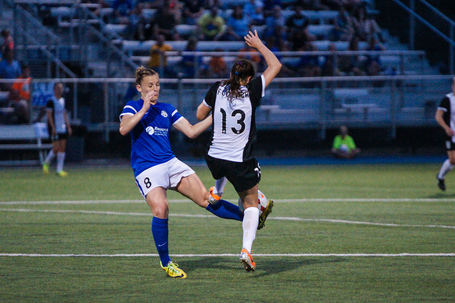 This is Rodriguez's leg approximately 20 minutes after the match.Not horribly mangled but the cleat marks are clearly visible. 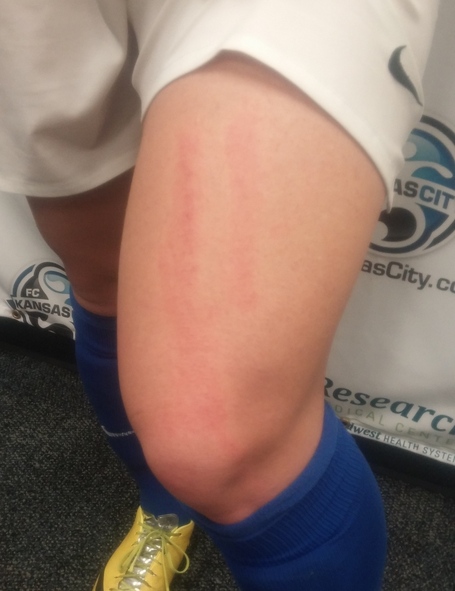 During the second half when Solo was on the end where the Blue Crew (a small but growing supporters group) sit, some of the fans chanted things like "who needs Hope, we've got Barnie" and "Barnie's better" referring to FC Kansas City keeper Nicole Barnhart.

After signing some autographs for fans, Solo was reported to be headed towards the interview room after the match but instead stopped to talk with a few of the Blue Crew. Several sources relayed that Solo got up close to the fans and said "does it make you feel good putting down professional athletes?" Solo also mentioned how hard she worked.

When the fans replied they were just doing normal heckling, Solo reportedly made a very negative comment about a FC Kansas City player and then left. Solo then headed to the locker room and was not available to media.

To be fair, I did not witness the exchange but over a half dozen witnesses all said that it happened immediately after the match. This includes members of the Blue Crew, other fans that were in the area and some staff members.

Every time I have interviewed Solo in the past she has been a true professional and gave far better and more thoughtful answers than many of the questions deserved. It would seem out of character for the times I have interacted with her and I would have expected her to not be thin-skinned by now.

I contacted the Reign for comment Thursday afternoon but have not received a response.