Major League Soccer announced the players that are on the fan ballot for the 2014 AT&T MLS All-Star Game. There were eight players selected by media on the ballot for each team. Sporting Kansas City's nominees:

DEF Seth Sinovic - Leawood, Kansas native has contributed to five shutouts, most of any player this season, and leads all Sporting KC defenders in minutes played

Fans can vote at online at MLSsoccer.com through July 11 and votes will be tallied via Twitter from July 2-6. Eleven players - one goalkeeper, three defenders, four midfielders and three forwards - with the highest combined votes will be named to the All-Star Fan XI.

The 11th player - a forward - will be determined by the AT&T/EA SPORTSTM "More than a Vote" Challenge. Fans have the opportunity to vote one forward into the 2014 AT&T MLS All-Star Game by scoring goals in EA SPORTS FIFA 14 on the Xbox One, PlayStation®4, Xbox 360® video game and entertainment system, and the PlayStation®3 computer entertainment system. The forward with the most votes - one goal equals one vote - on July 11 will occupy the final forward spot on the All-Star Fan XI.

Will Sporting Kansas City fans turn out the vote for their players considering the last two years SKC players have been hurt in the All Star Game. Zusi started the 2013 match at Sporting Park but left the game after about 26 minutes with a muscle strain. Zusi did not return to full training for almost three weeks.

In 2012 Aurelien Collin fractured his face and needed to wear this mask upon his return, although he did discard it shortly after starting in his first match back. 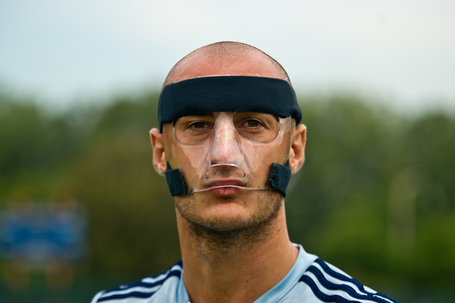