Day After Data Dump - Revenge of the Fifth

Kansas City wind up back on top of the Eastern pile with a convincing 2-0 win over the Columbus Crew.

Share All sharing options for: Day After Data Dump - Revenge of the Fifth

So again, I think Sporting Kansas City turned in a really solid performance and it sort of looked like the scoreline would barely show it until a nice little 95th minute tap in from Bieler bumped it up to 2-0 and a more fitting score line. I'd say that after receiving their championship rings, the team, overall, played like... well... sort of like Champions? Not to crown them right away of course, were it not for a pretty nifty goaline save from Eric Kronberg and a somewhat boneheaded second yellow card from Wil Trapp maybe the complexion of the game changes?

But that didn't happen, and though Columbus wasn't really played off the field, Kansas City looked to be the stronger of the two teams for much of the match despite being relatively even in terms of things like possession, passing, shots, etc.

One thing that I found somewhat interesting was that, although the passing statistics for both teams looked similar overall (80% accuracy for SKC vs. 77% for Columbus), the numbers are a bit more disparate when you account for only passes from the midfield. Kansas city had an 84% accuracy in passing from the midfield while Columbus has 76%. Benny Feilhaber, Paulo Nagamura, and Uri Rosell all did a good job in controlling the midfield and keeping possession I thought, and the numbers somewhat bear that out.

Another clean sheet means Kansas City has given up only 6 goals this season. That's second best in the league only behind the LA Galaxy, who have only given up 5, but have played in two fewer games. Kansas City has the best goals against average in MLS right now, which is a good sign for a team that won their rings on the back of their defense.

I was going to talk a bit about how much Kansas City outfouled Columbus, but decided that maybe that's a better conversation for later. If anything though, it will probably offer some fodder to those who think we're a thuggy team (and, statistically, we are, second highest fouling team in the league currently). I've come to accept, and even embrace that, though. For now, let's look at player ratings.

I'll fully admit that Beiler's rating is skewed and that goal was really a product of Graham Zusi's vision and Soony Saad's hustle, but still, he put it in the back of the net and it counts towards his numebrs, so there you go. Unsurprisingly Zusi with Man of the Match, but high ranks to the entire back line here, including Eric Kronberg, who either responded to critics and rose to the occaison, or simply had a really a great game (DAT SAVE!), or perhaps is starting to grow into his shoes and finding his comfort, and this is the level he plays at? Likely a combination of all three. Or none of the above. I guess it doesn't really matter. Honorable mention to Kronberg for a really good outing.

Edit - And, on a lighter note, I was down near the Crew players warming up and we got a good round of "WE WANT PIZZA!" chanted to Oduru, who laughed, gave us a thumbs up, and waved before getting subbed in. Funny moment. Funny guy. Kudos to him for a laugh. 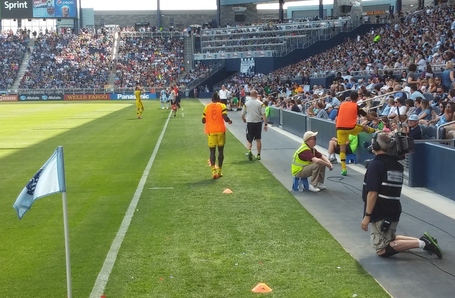