Breaking down Eric Kronberg's amazing 30th minute save to keep Columbus off the board.

Share All sharing options for: Sporting Replay: Breaking Down Eric Kronberg's Save

Eric Kronberg had himself a game Sunday afternoon, making several key saves to keep the Columbus Crew off the board. One save he made in the 30th minute was one of the most impressive seen this season just because of how quickly he reacted. Click the pictures below to make them larger as we break down the defensive collapse that led to Kronberg's amazing save. 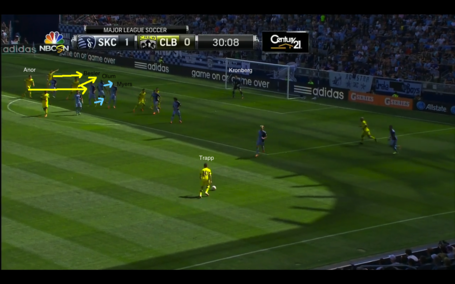 Here we start to see the formation of the Crew's attack off the cross. Will Trapp has enough space to set up a cross, meaning the Crew can make several runs to confuse the Sporting Kansas City defense. Here we see Bernardo Anor about to cut inside of Arietta while the two on the far post make straight runs to try and backup Anor. 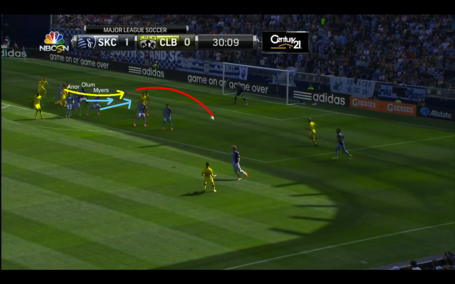 Here is where Anor cuts inside behind Olum and Besler. He has lost his marker and Olum has no idea that Anor is behind him, meaning he is going to get a free head on the ball. The ball was placed perfectly as shown by the red marker. Myers is going to try and defend the ball from the two near post attackers with no idea that Anor is making a run either. 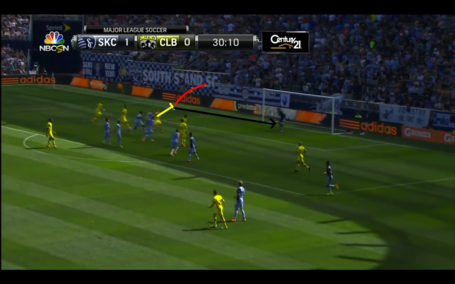 Here is Anor about to hit his shot. He is wide open at this point and only has Eric Kronberg to beat. The black arrow here shows where Anor is about to hit it in comparison to where the defense and Kronberg is. 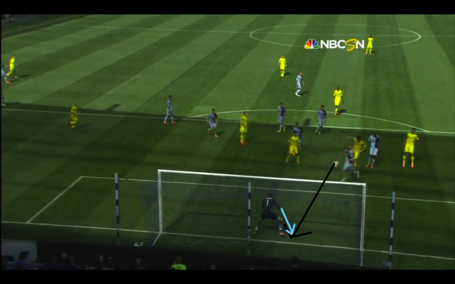 Switching views here, we can see just how fast Kronberg reacted to this goal. The ball is traveling fast to his low right and he only has seconds to get his 6'5" frame down to save the ball. 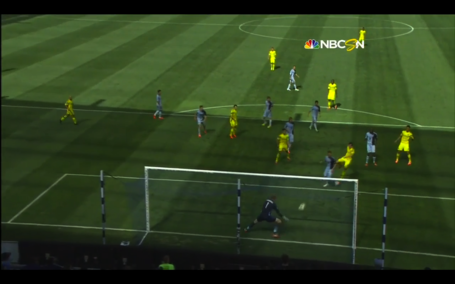 Here is another shot with the ball only a couple of yards out, looking very much like it's about to slide down under his right hand. 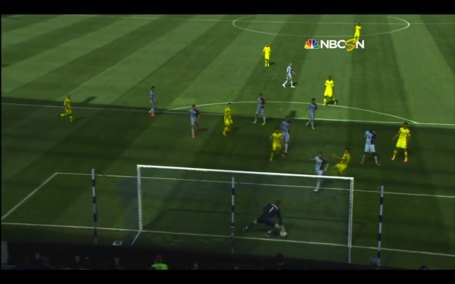 The final shot shoes just how little of his hand he got on the ball. With his fingertips, he stopped a ball that was traveling fast towards goal and directed it towards his knee, where the rebound was cleared away by Matt Besler.

It's easy to see how he was able to do it in frame by frame analysis but the fact that he made this save in less than five seconds makes it so impressive how fast he was able to both react and to get his frame down to make the save.