With several call ups to the National Team, the Blues will be depending on a lot of younger players

FC Kansas City travel to face the Houston Dash Saturday evening. The Blues are currently in second place in the NWSL and will be looking for a good result to solidify their spot and close the gap on first place. FC Kansas is riding a 5 game unbeaten streak with three straight wins.

Both FC Kansas City and Houston will be missing players that were called up for the U.S. Women's friendlies with France at 6:30 today in Tampa and the 19th in Connecticut. The Dash had Whitney Engen and Meghan Klingenberg called up while the Blues will be missing Nicole Barnhart, Becky Sauerbrunn, Lauren Holiday, Sarah Hagen and Amy Rodriguez. Hagen has just returned from playing for Bayern Munich and will join the Blues after the U.S. camp.

"We know it's not going to be an easy game for us, missing five players but we have a solid roster," FC Kansas City head coach Vlatko Andonovski stated. "I am looking forward to how some of the younger players are going to do."

One of those young players is Sara Keane. With Barnhart called up, the Blues backup keeper should get her first start of the season. Keane played for West Virginia and was signed as a free agent after tryouts.

The Blues had numerous injuries through the first half, partly due to the long streak of nine back-to-back games but are getting back to full health. "Mostly healthy is probably the right way to put it. We have a few nicks and small injuries but for the most part we are healthy and ready to go," Andonovski said.

Depth from down under

Australian international Katrina Gorry joined the Blues in camp a few days ago and may be available for the match. "We are hoping, we're still working on the ITC," Andonovski explained. "We thought it would get here Thursday but as long as it gets here in time she will be ready to go. She is still adjusting to the time and the environment but it is obvious she is a good quality player and we are excited to have her around."

Gorry is a quick skilled midfielder who will add to the depth of the Blues. In practice she appeared to be very active and have a good shot.

UPDATE: Gorry's ITC did come in. 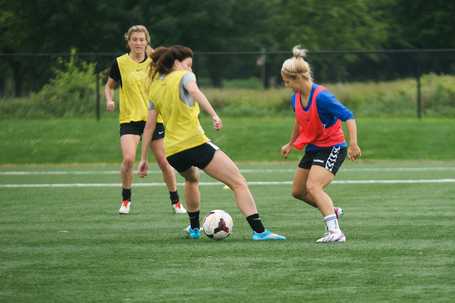 Gorry takes on Erika Tymrak in a scrimmage in practice via www.tpbphoto.com