The USA banishes a ghost as it defeats Ghana in pretty entertaining style.

Share All sharing options for: 2014 FIFA World Cup : Fear and Loathing (and Redemption?) in Kansas City

I'd love for this to be an analytical post. I'd love it if there were heat maps and passing webs and all that good stuff. But it won't be. Not even because I'm beyond that, but I'm just pretty much exhausted, and not even the good kind of exhausted. The kind of exhausted where you've been suffering through insomnia for a few days and worries there's something terribly wrong and you go to your doctor and explain everything to him and he runs some tests and tells you there's nothing wrong, you're just really tired and should try to relax, so you relax, and then you maybe feel better.

We should beat Ghana. Period. This game shouldn't have been that scary. I mean, well, sure, it should, because it's the World Cup, and every game is scary (and I could write novels about how entertaining this World Cup has been so far), but, pound for pound, we're a better team than Ghana. And that's no disrespect to them. We're just... I don't know. Underrated? I don't buy much into FIFA rankings or even Elo rankings, and yet, both those metrics have us as one of the best teams in the world. We should be expected to advance out of any group. Except, perhaps, this one. And Ghana was hurdle #1, and there was history, and nerves, and, oh god, I don't know. If you're reading this, you probably have your own take.

I'll stop there and back up a bit. I'll actually just James Joyce word vomit a bit, because my day was kind of crazy. Woke up. Shook off the Games of Thrones hangover (awesome season finale, they didn't do the scene I wanted them too, but I'm a snoody book reader, so ignore me), hopped the bus, decided to do a quick Power and Light walk through, just to, you know, get the nerves totally and completely shot because oh god why am I doing this. 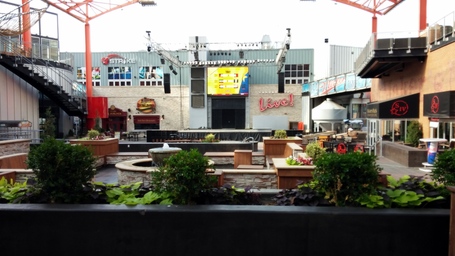 I sat and clock watched for awhile. I read some hard copy reports. I made some phone calls. I clock watched more. It was 11:00. Germany played Portugal at 11:00. It was time to go. I texted Sunni, whom I'd watched the 2010 World Cup with. She lives downtown. She'd be there in 15 minutes. Nice.

Walked from the Federal Building to Johnny's. 11:15. Barely any space at the bar. Glad I got there early. Found a seat. Saw Thomas Müller convert a penalty. Game on.

Jumping into analysis brain for a second, I sort of thought I wanted a draw going into this. A draw takes a point off the table and would force both Portugal and Germany into making their next games that much more important. At the same time, I could see either side winning being good for the US. Only needing 2nd to advance out of the group, and one team at a disadvantage, could also work for us. I don't know. Honestly, I wanted to watch a good game. And then Germany happened. 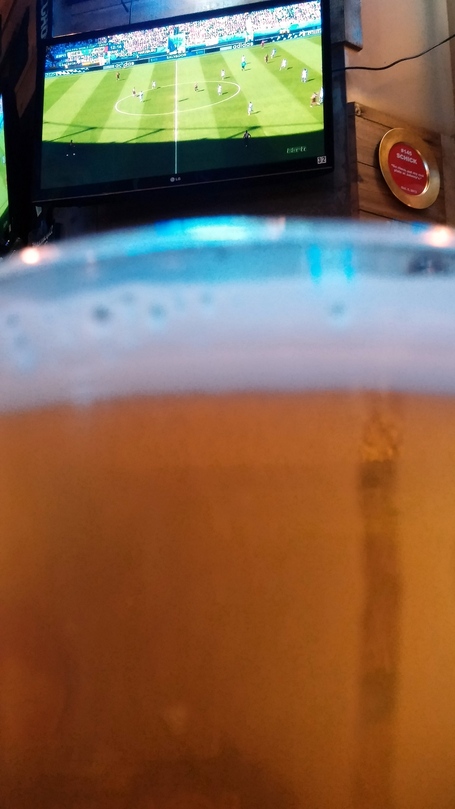 Was coordinating with the wife at the point. Sporting Kansas City had VIP tickets on sale for $20, but that included 4 drinks and access to patio/air conditioning/bathrooms with no lines, and the wife and I were still batting back and forth the idea of bringing our girls downtown. Here's me dad gushing. My kids are cute. They got dressed up today. Here's how cute they are. 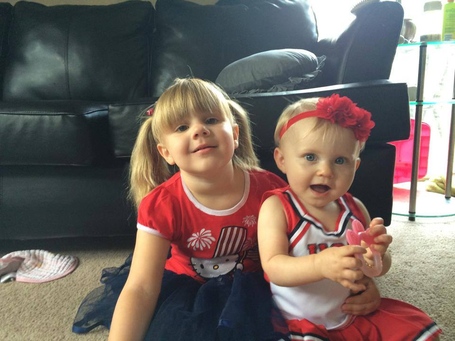 Okay, so Germany is pounding Portugal. Badly. Almost not entertaining. Johnny's is filling up. Here we are around 11:00. 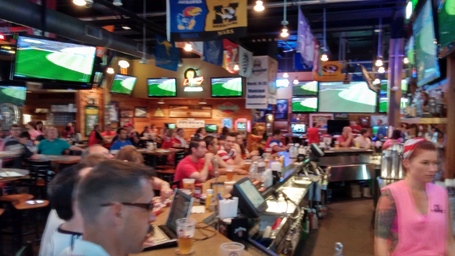 My phone lights up. There's some kind of tweetery alert. I'm not good at the tweeters. But Benny Feilhaber and Chance Myers are like 100 feet away? May as well go see them, right? Sunni and I put coasters over our beers (not leaving our seats, prime real estate) and go walk over to the Sprint store. I try not to fanboi much around players. My only questions would have been "Hey, Benny, you were like 10 feet behind Landon on the Algeria goal, if he fluffed it, would you have netted it and become a hero?" or "Hey, Chance, my uncle was a professional marathon runner and tore his Achilles heel really bad. Ended his career. Do you think you'll fare better?"

I asked neither. We shook hands, bantered a bit, and took pictures. Here we are. They're funny guys. Neat! 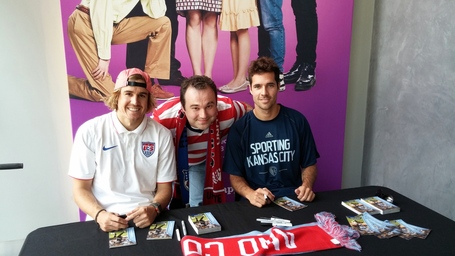 Yeah, walk back to Johnny's, and then the absurd happens. This takes some explaining.

So, last World Cup, Sunni and I nabbed a table and took a few pictures, because, four years ago, camera photos were all the rage. Technology yay. Anyway, we noticed some guy had photobomed us. Hah hah funny funny. I actually just went through and reposted these photos to Facebook because, hell, same teams, same place, same friends. Well, amazingly, somehow, some guy walked in and Sunni freaked out. "That's him! That's the guy who photobombed our last Ghana selfie!"

Here's the picture. You can see maybe a third of his face. 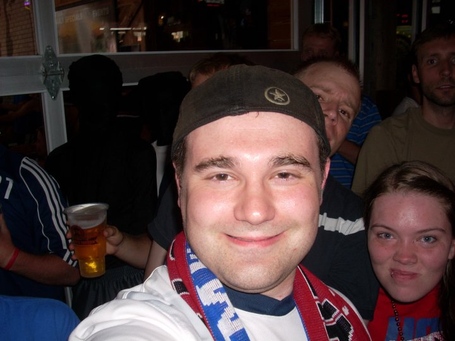 But, yeah. She recognized him and went to go find him. Lost him in the crowd. Only thing she remembered was he was wearing a 2002 USMNT jersey. Yeah. This thing. 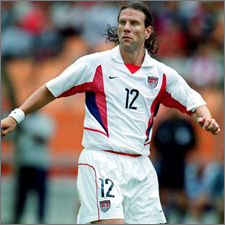 But, whatever. Seemed crazy. Probably not him. Just some guy. Oh god Germany is beating Portugal like a rented mule carrying a basket full of cliche's. Gotta pee. Go to bathroom.

"Hi guy in bathroom here's a weird question were you here four years ago?"

"Is this you photobombing this selfie of me and my friend" 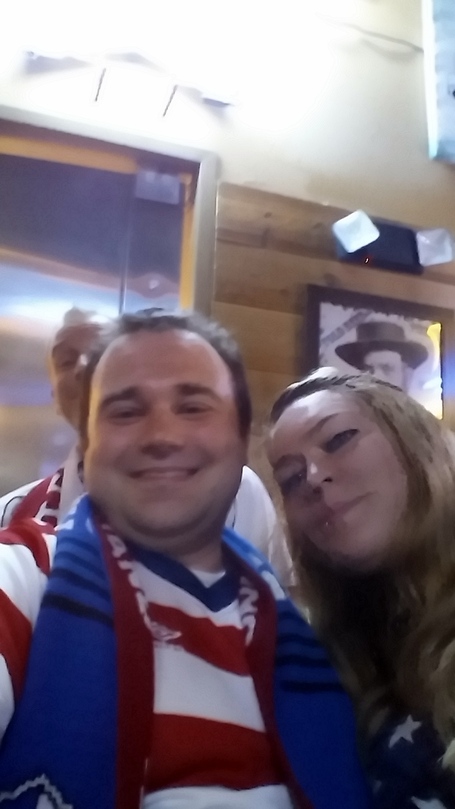 To recap. Four years ago, some guy wound up in a photo of a friend and I in a bar watching the US-Ghana game. Four years later, we ran into the same guy, at the same bar, watching the US play Ghana, and made him take another picture with us. And it was hilarious. His name is Paul. He's our Great White Unicorn.

Yeah. So, Germany routs Portugal. 4-0. Good result for us I think. A draw against Portugal and not losing to Germany by more than 3 means we go through. Exciting stuff. Nigeria and Iran happened, but, honestly, that's when The Terror ® set in. Just... no good.

I remember reading an English soccer forum post once where people were bashing MLS, which, fine, whatever, but the one that stood out to me was something along the lines of "American fans seem to enjoy going to matches. I don't get it. Soccer isn't something fun, it's something you suffer through, and maybe leave somewhat satisfied at the end".

It was a better post than that, I'm paraphrasing. Deal with it. My point is, at no point did I plan on enjoying the US game, and as the clock ticked towards kickoff it just go to bad.

The wife opted to leave our kids with her mom. Good call. We went upstairs. Here's how the crowd looked at kickoff. 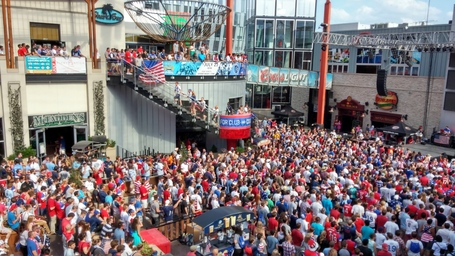 Impressive. And then, you know, this happened.

I really can't recall much about how the game went, to be totally honest. My big thought was "oh god, too much defending" and "Ughhh, Jozy is down, but that's not terrible, right? Wondo time?" and "Oh crap, Besler with a tweaked hammy? Ummm... ummm... umm... Brooks!?! BROOKS!?! Okay... okay..."

Hold on. Wait, stop just holding on. Attack. Not good, not good.

I don't know. At some point, Graham Zusi went in, and, as cool as that was for us Kansas City folk, I just didn't know. If we were going to bunker, maybe somebody a bit more defensive minded would be better? Though I have no idea who that would be. Conversely, maybe we did need an offensive spark. Stop holding, start attacking. But then Ghana got a goal, and oh god. The inevitable seemed... evitable? Yes and no. I was pacing a lot. Walking the balcony. My wife brought pizza. It was... not good. I ate pizza. I drank beer. I walked back outside. I needed to just be somewhere not inside. And then there was a set piece. And then Zusi stepped over the ball. And I don't remember seeing the goal at all. But there was a goal, and I new it, because it was very loud all around me and because I'm super lame I pulled out my phone again and took a video and it looked like this.

Yeah, that's my wife running over to kiss me, and me not knowing what to do, so just holding on to my phone and sort of filming things and everything being awesome.

I don't know. The memorable parts of my day were everything except the US game, and then everything after the US game. I'm not sure I've even made a lot of sense here.

Like I said, this is word vomit. I might try to sit down with Opta tomorrow and draw up some numbers on how the US performed (honestly, I don't think great, too flat footed, too far pinned back, too many nervy moments, not agressive enough, etc), but I'm just really, really, really happy. Maybe not Donovan-Algeria happy, but close to.

I'll be honest. Going into this, I had the US on 4 points in this group (win v Ghana, draw v Portugal, loss v Germany) and bowing out on goal differential. But now that seems to lend itself to the US going for.... christ. No. I'm not tpying this. No future talk. Just present. Happy. A world cup win, and in awesome fashion. And the capture of a great white unicorn. And just all around goodness.

That's all I've got.

How was your day?