A look at the player ratings from a few major outlets and a few thoughts.

Usually I like to go through the Opta chalkboard and stats posted by MLS, but they've changed the way they display the stat info, making it really really hard to actually get good player info. Which is sort of a shame, because I liked it. So instead of doing my own player ratings, I pulled together some of the big outlets. Here's a summary.

As you can see, good marks for the SKC guys. Universal praise for Brooks and Howard, some critical numbers for Michael Bardley (warranted I think, he didn't have that great of a match, though you could argue this wasn't a match that got played in a manner that would match his style) and, I think a little interestingly, a bit of a gap between the top half and bottom half of players. Here's a histogram to show what I mean. 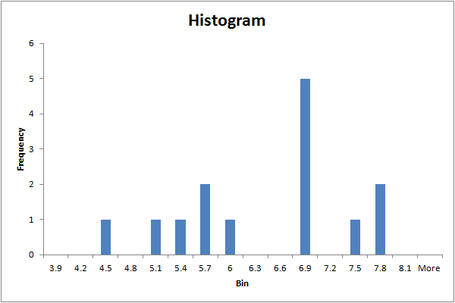 You can see 8 guys had an average rating over 6.6, and 6 guys below 6.0. Maybe we could sort these guys into Keep It Up vs. Step It Up categories?

Time Howard - Two good saves and did a good job organizing the defense, especially in the box. One of the best at the World Cup.

Matt Besler - Had a solid first half, no major mistakes, shame he could only play 45, but perhaps fated to step aside for Brooks.

Graham Zusi - Stepped in well, had a good cross or two, then inch perfect on the corner kick. Wouldn't midn seeing him

DeMarcus Beasley - Sort of a typical game from Beasley. Frantic bend-dont-break defending, but the prospect of Ronaldo running at him is really, really scary.

Fabian Johnson - An okay enough match, but I was a little surprised to see him start and think he still needs to play better in the coming matches. On the other hand, sometimes good enough is good enouhg, especially where the US right back position is concnered.

Michael Bradley - Off day, didn't really seem on his game. We're gonna need a better performance these next two matches.

Alejandro Bedoya - Had a good enough showing but room for improvement. I think I'd rather see Zusi with the start and see Bedoya off the bench.

Jozy Altidore - Harsh to even rate him. Hope he can be back healthy. Talk about capping a bad EPL season...

Aron Johannsson - Couldn't fill in for Jozy and didn't seem to know how to adjust. Maybe Wondo is a better option assuming Jozy is out.

So then, given that both Cameron and Brooks had identical numbers, I nominate them both for Man-of-the-Match honors. Cameron with the more complete game, holding off waves of Ghana attacks, and Brooks for, you know, game winning goal and a good defensive shift.