Rate ALL the Players

In which we attempt to assign ratings to every MLS player

Share All sharing options for: Rate ALL the Players

So we're about to the halfway point of the season. Kind of sort of. After the World Cup Break, but before the All Star Break. So the midpoint between breaks? Anyway, most teams have played about 17 matches.

Anyway, one thing I like to do is throw player fantasy scores and minutes played into a spreadsheet and calculate a rating for each player based on how well they've fared compared to the average MLS player, and try to adjust it for playing time (i.e. guys that are consistently good get weighted higher, guys that have been good but only played a few games are weighted lower). I also only rated players against other players playing the same position. I'll actually show the calculations at the bottom of this for those interested.

And before I throw up ratings, I'll go ahead and address a few of the flaws with this method. The first is, it uses the MLS fantasy scoring system, so if you disagree with the way it awards points, there's already a big flaw. Another big flaw is that playing time is a factor, so guys like, say, Graham Zusi or Matt Besler, who spent a good amount of away from MLS on National team duty see their rating suffer. Same deal with guys who have played well but missed a few games with injuries.

And, of course, another big problem is that not every team has played the same amount of games, so some guys have more minutes and more chances for points than others. Seriously, how have LA and Toronto only played 14 games while Dallas is on 19? This will balance out at the end of the season, of course...

The best way to think about it really is a "contribution" rating. That is to say, they're less ratings of how good a player is, but rather, how much have they directly contributed to their teams success.

For Brevity, I'll only put the first 25 players up, but here's a link to the Google doc with all players who have played more than 100 minutes (including guys who have played less really starts to skew with averages and such). 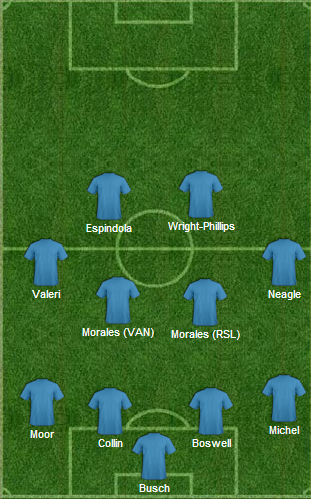 So that's maybe not the "flashiest" best XI, but I'd say it's definitely solid.

What say you? Feel free to jump to the comments, I'm going to show a little maths below.

Now then, the calculation isn't that complicated, but it's spreadsheety so it gets dirty quick.

First, each player has an assigned point total from the MLS Fantasy game.

Also it might help to link to the scoring system.

Given this info it's a simple matter of calculating a players point-per-minute by dividing the number of points they've scored by the number of minutes they've played.

I do that for each player.

I give each player a rating based on their PPM by averaging all the PPM totals for all players, and I calculate the standard deviation for the set of all players PPM. To get a 1 - 10 rating I assign a value of 5 to an average player and calculate a Z-score for each player.

That is to say, for each player, their rating is 5 + [(player PPM - average player PPM)/(PPM standard deviation)]. This is their first player rating.

I then average these two values. This ensures that guys who come in as a sub and score a goal don't have an inflated points per minute total. Also it makes the numbers just look a little better. :|

I'm not so sure that's explained well in words, but if you go into the spreadsheet linked above and click over to the other tabs you can see the calculation steps.