One season removed from scoring the second most goals in the league with the same front three, Sporting Kansas City now sits 3rd from bottom, ahead of only the Chicago Fire and Vancouver Whitecaps. Obviously, the losses of Alan Pulido, Gadi Kinda, and Gianluca Busio play a part in the significant reduction in attacking power. Is that the whole story though? Is it a matter of Johnny Russell and Daniel Salloi scoring goals in bunches rather than a steady consistent pace? The impact of those factors is difficult to measure, but I think there’s another factor that is causing problems that is more easily remedied than healing major knee injuries or bringing in a major transfer.

The benefit of running essentially the same system for several years is that it should promote drilled patterns and fundamental principles that remain consistent through changes in personnel and individual talent. A great player and their individual strengths will enhance the play of the team, but there is a baser concept that should provide offenses advantage in most situations: foreknowledge. Looking at the great possession-based teams in Europe (especially those that run a 4-3-3) like Liverpool, Manchester City, Real Madrid, etc., there is a consistency in attacking patterns when they go forward with the ball.

Sufficed to say, Sporting KC are not those teams. The reason those teams consistently find themselves in good attacking positions is because they drill specific movements and passing concepts in the final third which gives them an advantage over the defense. This year, Sporting has shown very little effective movement in the final third (with the exception of Daniel Salloi, who leads MLS in runs per game).

To illustrate the system Sporting KC works within at its best I have examples from one of last year’s games against Vancouver which ended 3-0 to the good. Unfortunately, I don’t have access to match film or positional info to show the difference between last year and this year, but the matches I’ve watched so far look much different. In possession, the fullback on the non-attacking side tucks in to form a back three with the 6 sitting in front of them to shift the ball from side to side. The other fullback pushes up, while the wingers slide centrally and one of the 8’s moves wide on the opposite side. 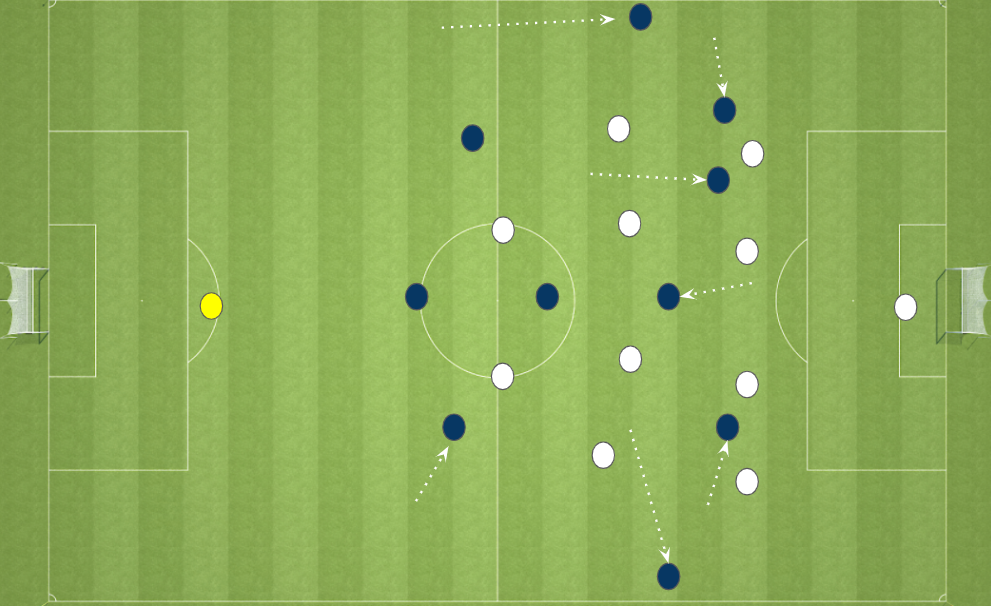 Once in this position, the ball is cycled side to side until it can move up past the midfield defenders. 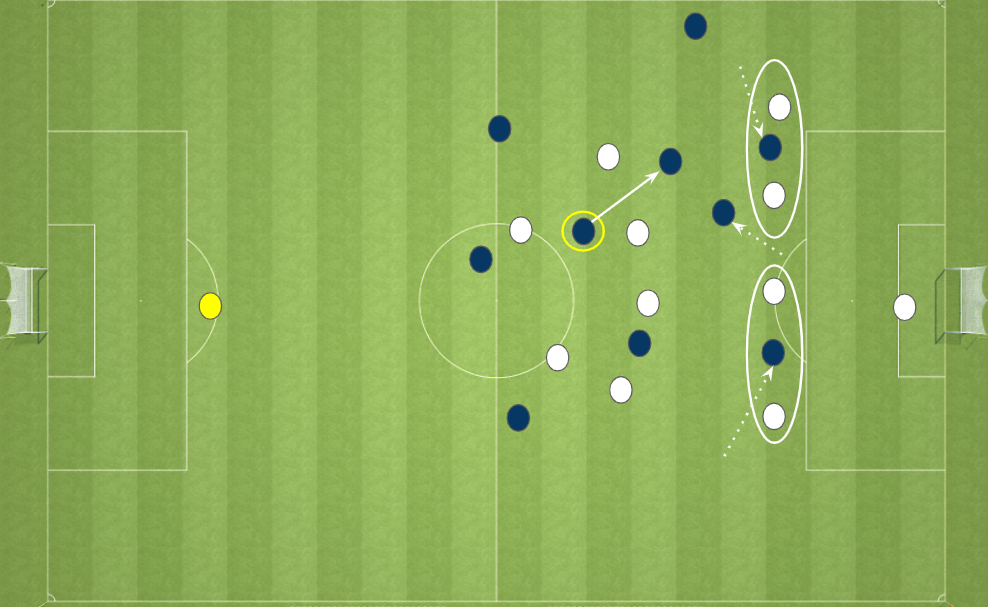 This represents a central attack, which requires more quick passing in tight spaces that Kinda and Pulido excelled at, and Shelton and either 8 are not the best at. Personally, I believe Salloi, Tzionis, or possibly Vujnovic are better suited to this attacking pattern, but that’s secondary to the recurrent problems Sporting faces. The wingers should then move in between the CB/FB pairings on either side, threatening runs and keeping them from easily committing to stepping out to challenge the ball without leaving space behind. The 9 comes to receive the ball while leaving wide areas open for runners. 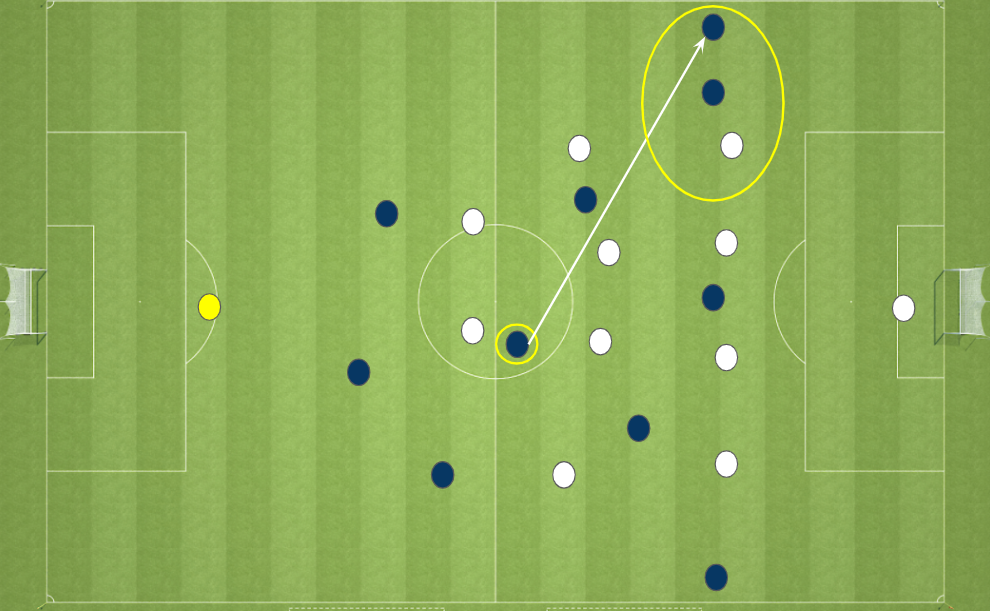 Alternatively, and more useful to the current iteration of the team, is to create overloads on either wing. This has been closer to what SKC have attempted most possessions. Ndenbe and Duke are excellent pieces in this setup as their pace and technical ability give them a theoretical edge against fullbacks stuck between two marks.

This is where the breakdown occurs. Once in this position SKC has been standing in their positions game after game waiting for individual moment to penetrate defenses rather than occupying the defense and making coordinated runs in and out between each CB/FB pairing to try and freeze them while runs on the other side are made toward the space in behind. In this shot, we see that the two wingers are pushing in to engage the defenders while the attacking fullback is free to attack the open space down the flank. 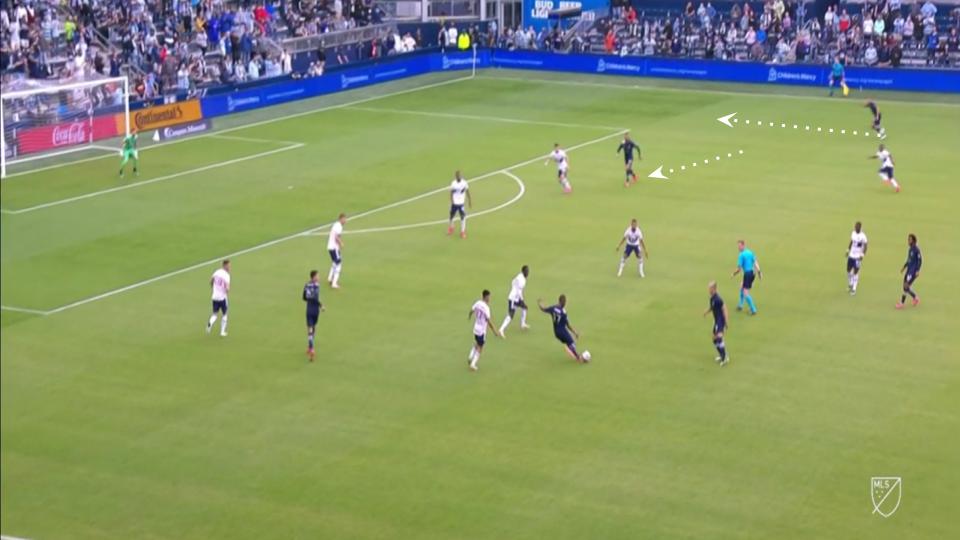 In the other option to create overloads on the wing, attacking runs are illustrated showing both the occupation of defenders and runs through the lines so crosses can be played in with both attackers and defenders running toward goal. 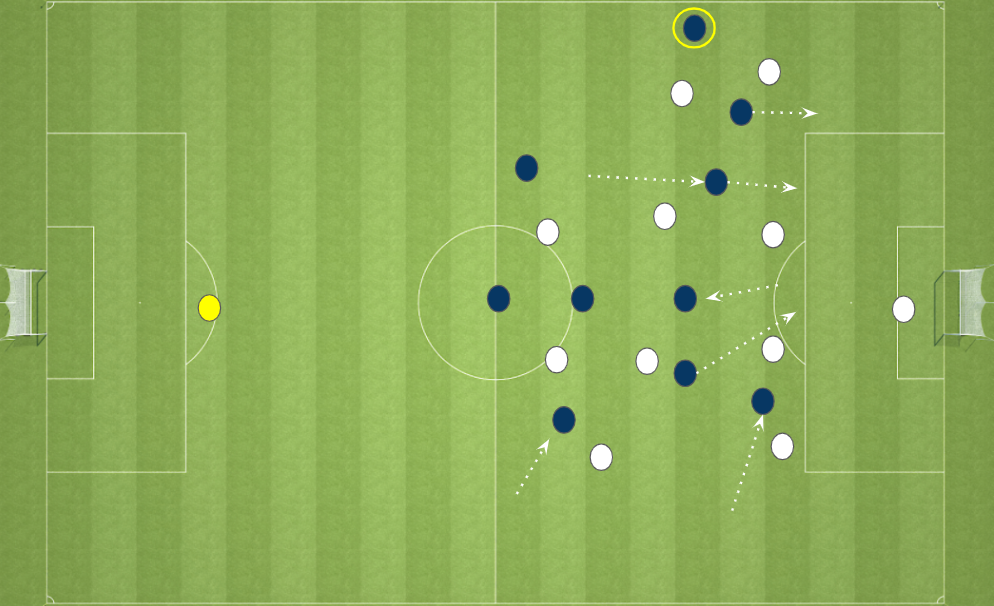 I don’t know if there has been a failure in practice to drill these patterns, or if it is down to individual players that are failing to run the patterns. Either way, this year Sporting KC attackers are not making those runs. There have been multiple times where the ball gets to a wide position with a winger and fullback, where they play short pass after short pass back and forth as help defense arrives. Meanwhile, along the defensive line, there is little movement to create targets for crosses or through balls. Without the advantage of utilizing attacking patterns, attacking in a possession-based system becomes a series of one-on-one duels. Sporting KC do not have the talent advantage of the top tier teams in the larger European leagues that can thrive in that circumstance.

According to the MLS stats, Salloi and Russell have a 50% and 55% success rate on dribbles this year respectively, and in limited action Tzionis has a 62% rate. This is not a sustainable model for success. Sporting KC is built to control the ball and take advantage of numbers and positioning near the goal rather than ride the coattails of a singular star goal scoring 9. Until the movement becomes consistent, it won’t matter who Vermes trots out on his front line, the only goals scored will be individual brilliance, lucky bounces, or set pieces/PK’s.